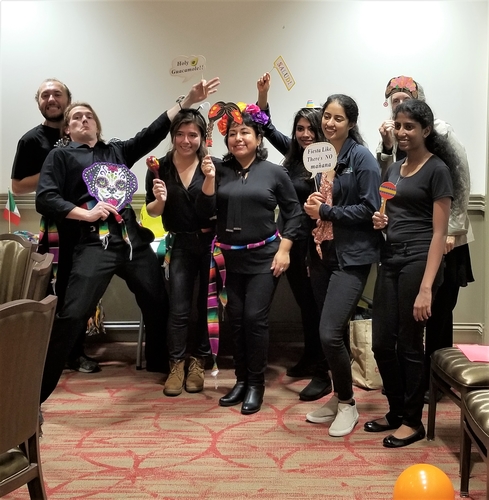 WKUs Potter College of Arts & Letters and Department of Modern Languages recently celebrated El Día de la Hispanidad with a colorful event brimming with Hispanic culture, food and dance, and fun for everyone involved. The event was a hit, with a lineup of culturally informative festivities. Spanish Instructor Yertty VanderMolen’s objective was to hold an event welcoming Hispanic faculty and students and she made it an exciting night as well. “My goal was to celebrate Hispanic culture, and the Hispanic community on our campus,” said VanderMolen, “I want our Spanish heritage speakers to feel welcome, to fit in and be well represented throughout their college experience at WKU. I hope these students feel proud of their heritage, and know that WKU, the Potter College of Arts & Letters, and the Department of Modern Languages will help them succeed.”

The event featured traditional Hispanic food, music, and dance. Contributors included history Prof. Marc Eagle, who gave an entertaining and informative talk on the importance of Hispanic culture; singers and performers Hasum Morfin-Gandara and Amanda Pate sang beautifully and traditionally as a duet; music major and guitarist Barry Lee Washer provided traditional Hispanic music on his guitar, songs he patiently learned to honor Hispanic culture; International WKU student Gabriela Vargas embodied the sheer beauty of her heritage and passion for dancing by performing traditional Peruvian dances in native dress; and Zumba instructor Julia Rivas, Minority Recruiter and Coordinator, got everyone’s blood pumping in a fun and exciting Zumba routine. H.O.L.A.S, the Hilltopper Organization for Latin American Students, included a game for the audience that heated up the event with the spirit of competition. The final event was a costume contest organized by student Griffin Fletcher.

WKU student Christine Belance had this to say about the event: “Attending the El Día de la Hispanidad event was a phenomenal experience. The celebration was beautifully set-up and worthwhile. Viewing traditional dance styles from Peru allowed me to understand more about their culture. Gabriela’s passion for her heritage shines when she performs. One of the most fascinating topics I learned was from the guest speaker, Prof. Marc Eagle. He spoke with such respect for the topic of Latinos, Hispanics and their culture, and allowed me to understand more of how it has influenced America today and will continue to do so."

The event was developed and organized by Yertty VanderMolen. She extends her thanks to the Potter College of Arts & Letters for sponsoring the event, to the members of H.O.L.A.S., to the Spanish Club, and to the Modern Language’s Department Student Ambassadors who assisted with setting up the room and activities, and to all of the performers and students who attended the event and made it a success.

While this was the first time WKU celebrated El Día de la Hispanidad, VanderMolen hopes to hold the event again next year. In the meantime, Ms. VanderMolen is happy to welcome you to an upcoming Spanish Club meeting! The Spanish Club meets every Friday from 5-6pm in HCIC room 2016 and is open to any student interested in the Spanish language and cultures. Contact Spanish instructor Yertty Vandermolen at yertty.vandermolen@wku.edu fo