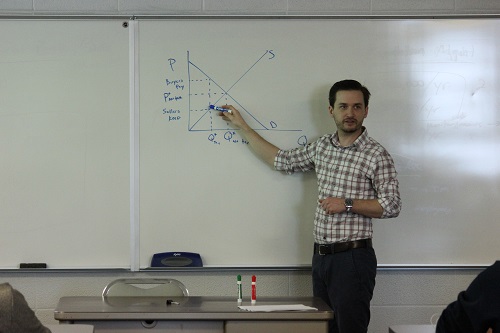 After graduating from the GFCB with an Economics degree in 2008, Dr. Stephen Locke decided to head to graduate school rather than deal with an unstable job market. After earning a PhD and spending a couple of years as a researcher at UCLA, he made his way back to Bowling Green and the Department of Economics.

“I really enjoy it,” he said. “I can relate to the students. I know what they are going through. I am the first in my family to go to college like many of them.”

Locke spent his first two years completing classes on the Glasgow campus, which was the best thing for the soft-spoken man. He said he was grateful for Glasgow, where he was able to ease into his classes until he felt better prepared to come to main campus.

“I enjoyed the smaller classes and getting to know the faculty,” he said. “I enjoyed my economics and accounting classes so I knew that’s what I wanted to do.”

He said one of his favorite professors — who is now a colleague — was Dr. Dennis Wilson.

“His intermediate microeconomics course really challenged me,” Locke said. “It was tough but I enjoyed the challenge.”

Another professor, Dr. Michelle Trawick, encouraged him to take more math courses because he did well in his statistics course and that would put him on a path to graduate school. The path that led him to working at his alma mater.

“I actually had three job offers: one in Michigan, another in Georgia, and WKU,” Locke said. “I made the best choice.”

Dr. Locke is one of 24 alumni who now serve as faculty and staff in the GFCB.