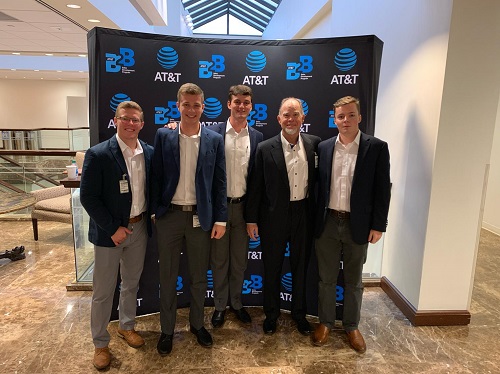 The WKU Center for Professional Selling program sent four students to AT&T’s National Sales Competition October 10-11 in Dallas, Texas. The student team was one of 12 across the country selected to visit AT&T headquarters.

The team consisted of Simon Gill of Bowling Green; Robert Heiskell of Bardstown, Ky.; Jacob Jaynes of Liberty, Ky.; and Joe Webb of Bowling Green. They are coached by Marketing Instructor Chris Derry. Mr. Derry learned about the competition from former GFCB student Joseph Occhipinti, who now works for AT&T.

The first round of competition occurred virtually in September with 36 competing universities. Students participated in a video conference call with AT&T Business2Business professionals. They were provided a scenario with the students determining the needs of the prospect and then delivering solutions in a role-play environment.

After this virtual round, the number of competing universities was reduced from 36 to 12. WKU was one of 12 schools invited to take an all-expenses paid journey to Dallas to compete in the final in-person round of competition.

“We prepared our presentation around specific AT&T solutions that would positively affect revenue and business operations for a company-based case study,” said Gill. “This competition provided us with insights from AT&T on their expansion strategy. We are able to learn how they plan to continue expanding their Business2Business sales program to drive growth.”

AT&T professionals spent time with the students over the pool table and at Topgolf, providing helpful information to them about the competition as well as potential careers with AT&T.

“I was able to network with numerous professionals who all offered advice, even if it did not concern AT&T or the B2B program,” Jaynes said. “I was not extremely familiar with AT&T before heading to Dallas, but after the fact, I realized AT&T is much more than telecommunication.”

Connecting students with companies like AT&T is always a goal for the GFCB. In fact, AT&T’s regional recruiting staff will be on campus in November to talk with students interested in going into sales.

“This is a direct result of what we are teaching them,” said Derry. “So I am just delighted for their success.”

While the WKU Professional Selling team did not win the competition in Dallas, at least one team member won a job with the company.

“I have taken the job I was offered after the competition,” Jaynes said. “I will be in Dallas for 4-6 months starting this summer for a full-time position in their B2B program.”

The WKU Professional Selling program is the only certified sales program in Kentucky of Tennessee and offers both a major concentration in sales along with a minor in sales. For almost a decade, this program has been one of the fastest growing majors and minors on campus. Currently, nearly 300 students are majoring or minoring in sales.

For more information on how you can become a WKU sales student, or if you are a business looking to recruit sales students, please contact professor Lukas Forbes at lukas.forbes@wku.edu or call him at 270.745.2993.