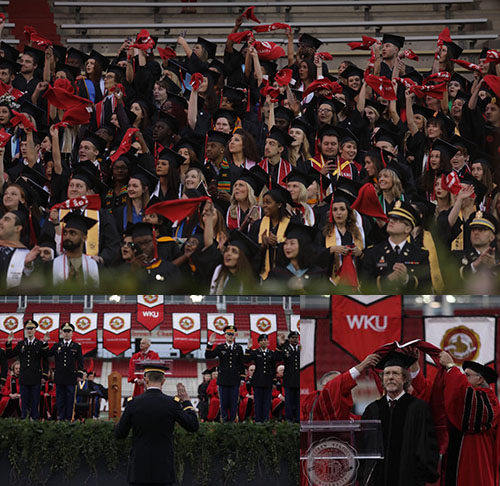 WKU conferred degrees and certificates to 2,677 spring graduates and presented an honorary doctorate to award-winning musician Sam Bush on Friday night at its 185th Commencement. (More: Video of the ceremony)

“Graduates, you have reached a key milestone in your life – and one that is likely to be among the most significant,” President Timothy C. Caboni told the Class of 2019 at Houchens Industries-L.T. Smith Stadium. “But we are not here tonight to celebrate the degrees you have attained; the careers you are pursuing; or your academic successes. What we are celebrating is the continuation of what I hope is a lifelong journey of learning and of discovery.”

President Caboni encouraged the graduates to use their WKU experience to change the world.

“Your WKU experience has instilled in you a set of core values and beliefs that are not negotiable,” he said. “You know that there is right and wrong, good and bad, acceptable and unacceptable. And when it counts the most, stay true to those values. Don’t be passive in life. Instead, speak up, engage, make a difference. This is what Hilltoppers do.”

President Caboni noted that Bush’s 2016 album “Storyman” features the song “Bowling Green,” co-written with John Randall Stewart, which describes growing up on a Warren County tobacco farm. “Sam Bush is a revered member of the bluegrass community who never forgot his Kentucky roots,” he said.

“Thank you Western Kentucky University for this great honor,” Bush said. “It’s a long way from a cattle and tobacco farm five miles outside town on Morgantown Road.

“I just want to say thank you. What an honor. I never thought this would happen.”

Friday night’s ceremony began with Topper Walk as WKU faculty and members of the Class of 2019 made their way from the Kentucky Museum to Houchens Industries-L.T. Smith Stadium. Following the ceremony, graduates and their families celebrated at the Big Red Bash on the WKU South Lawn. (More: 185th Commencement program)

Rachel Kaiser of Covington, who received a Master of Science in Geoscience, was recognized as the John D. Minton Award recipient. The Graduate School’s top award is named for Dr. John D. Minton, who was a history professor and WKU’s first graduate dean and served as vice president for Administrative Affairs and as WKU’s fifth president.

Kaiser participated in the Joint Undergraduate-Master’s Program and has an outstanding academic record with local, national and international thesis research. Through partnerships at the city and state level, and active collaboration with the United States Department of Agriculture and other partners, she conducted relevant and applied studies on groundwater in urban settings to enhance public safety, community understanding and drive policy. She has received multiple grants, awards and fellowships totaling almost $40,000 for her work improving water quality throughout the world.

Kyla Scanlon of Louisville, who received a bachelor’s degree with majors in Economics, Finance and Business Data Analytics, was recognized as the Ogden Foundation Scholar, WKU’s top undergraduate graduation honor. The Ogden Foundation Award is presented to one graduating baccalaureate degree senior who has demonstrated exceptional academic achievement and outstanding university and civic engagement.

Scanlon’s research includes investigating the effects of terrorist attacks on the U.S. stock market. She runs a blog titled “Scanlon on Stocks” and contributes to “Seeking Alpha,” a financial news website. Further, she has a financial podcast, conducts bi-weekly equity research and publishes articles with over 70,000 followers. Scanlon is the founder and president of Women in Business, managed a $500,000 portfolio as part of the TVA Investment Challenge and is a graduate of the Mahurin Honors College.

The award was presented by Darryl Greattinger, a member of the Ogden Foundation Board of Trustees.

On Saturday, WKU’s five academic colleges will host special recognition ceremonies at Diddle Arena to celebrate the accomplishments of their graduates who will walk the line and shake hands with President Caboni. The schedule is as follows: Gordon Ford College of Business at 8 a.m.; Potter College of Arts & Letters at 10:30 a.m.; Ogden College of Science and Engineering at 1 p.m.; College of Education and Behavioral Sciences at 3:30 p.m.; and College of Health and Human Services at 6 p.m.

The ceremonies will be broadcast live by WKU PBS and webcast live on WKU YouTube Channel at https://www.youtube.com/wkunews and on the WKU Facebook page at http://www.facebook.com/wkunews

In addition to the WKU ceremonies, The Gatton Academy of Mathematics and Science in Kentucky will recognize 86 students from 43 counties in the Class of 2019, its 12th graduating class. The ceremony will begin at 10 a.m. Saturday at Van Meter Hall. Commencement speaker will be WKU English faculty member Walker Rutledge.