Teacher Hall of Fame inductee 'has had a lasting impact' 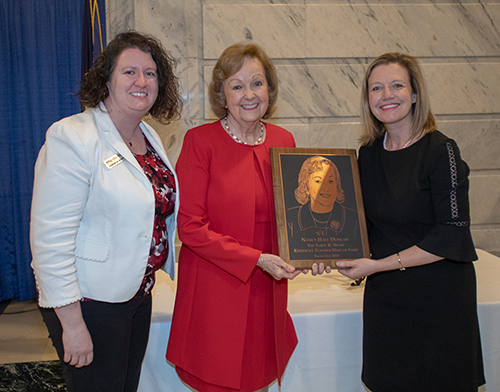 Nancy Hall Duncan (center) was inducted Wednesday into the Governor Louie B. Nunn Kentucky Teacher Hall of Fame. Participating in the ceremony at the Capitol Rotunda in Frankfort were Dr. Corinne Murphy (left), dean of WKU's College of Education and Behavioral Sciences, and Amanda Ellis (right), deputy commissioner of the Kentucky Department of Education. (WKU photo by Bryan Lemon)

As family, friends and colleagues looked on in the Capitol Rotunda, Nancy Hall Duncan of Versailles was inducted Wednesday into the Governor Louie B. Nunn Kentucky Teacher Hall of Fame.

Duncan, who began her teaching career in 1965 and retired in 1998, fell in love with teaching as a youngster. “My sixth-grade teacher picked me along with a few others to go and tutor the first grade students,” she said. “I loved it and I knew from the sixth grade on I was going to be a teacher.”

A native of Wheelwright in Floyd County, Duncan was the first in her family to earn a bachelor’s degree. She attended Union College and Western Kentucky State College, earning a degree in Home Economics while balancing obligations to her young family. She earned her master’s degree in 1975 from WKU and a Rank I Certification in 1993 from the University of Kentucky.

“I have so many wonderful memories,” Duncan said. “I was blessed with wonderful students.”

One of those students was Amanda Ellis, Deputy Commissioner of the Kentucky Department of Education, who said “it an absolute pleasure and honor today to introduce Nancy Hall Duncan” at the induction ceremony.

“Nancy Hall Duncan has greatly impacted students, teachers and our community in each role she has served in the school and outside of it,” she said.

Ellis, a former teacher and principal, said Duncan was “a wonderful educator who has had a lasting impact on her community and the lives of so many students.”

Duncan’s daughter, Pam, teaches math at Woodford County High School and has a great appreciation of her mother’s hard work and dedication.

Pam Duncan said her mother demanded excellence from her students and all are better because of her. “If there is ever a member for the Hall of Fame it is my mom. There is no doubt about that.”

Dr. Corinne Murphy, dean of WKU’s College of Education and Behavioral Sciences, congratulated Duncan on her lifetime commitment to education.

The Governor Louie B. Nunn Kentucky Teacher Hall of Fame was created in 2000 through a gift by former Gov. Nunn, who hoped to recognize the vital role that classroom teachers in Kentucky play in the education of young people and the positive impact education has on the state’s economy. Western Kentucky University was selected as the home of the Teacher Hall of Fame because of its more than 100-year history in teacher education.

The inductees are chosen by a statewide selection committee. To make a nomination, visit https://www.wku.edu/kythf/nominations.php