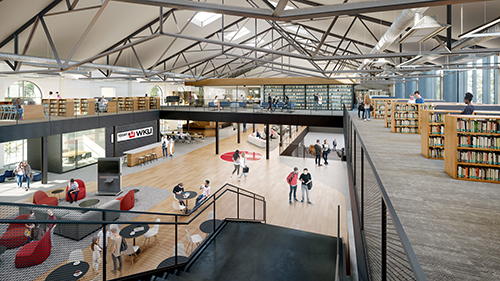 A collaboration with Aramark/Restaurant Group and University Libraries is leading to the creation of a reinvented space in WKU’s Helm Library.

The University today (Feb. 28) released conceptual drawings for The WKU Commons at Helm Library. The $35 million project will transform the Helm Library into a place where WKU students, faculty and staff can eat, meet, study and collaborate.

“The WKU Commons will be a gathering space for people to engage at the top of the Hill,” said Susann deVries, Dean of Libraries. “It will be an open, flexible and inviting place, offering multiple dining options, places for students to gather and study or to interact with faculty and others. We envision this space to be a buzz of activity.”

“Our contract with Aramark calls for a significant investment in dining options at the top of the Hill,” President Caboni said. “This provided a wonderful opportunity to create a space that invigorates engagement, stimulates learning and creates a sense of community for the entire WKU family.”

A committee representing faculty, staff and students has been working with architects Luckett & Farley of Louisville and Gensler of Chicago to take The WKU Commons from vision to concept. Their work included a design safari to Chicago to visit 16 similar venues, campus meetings with students, faculty and staff, and two online surveys for student input. The final schematic design will be presented to the University’s Board of Regents on Friday (March 1) and can be viewed on The WKU Commons website.

Will Harris, a Glasgow sophomore and the student representative on the committee, said he was particularly pleased that the student voice was solicited during the design.

“The committee worked hard to gather input from all parts of the community as they worked with architects to develop a design that will serve WKU well into the future,” he said. “The WKU Commons will bring together students, faculty and staff in a place where they can interact, share ideas or socialize. This will become a destination point at the top of the Hill.”

The building opened in 1931 and was named for librarian Margie Helm in 1964. The building was used as a gymnasium, referred to as the Big Red Barn. The basketball court jump circle will be preserved and commemorated in its original location.

Helm Library will close at the end of the spring 2019 semester for work to begin. The WKU Commons is expected to open in spring 2021.

deVries said this will be a complete renovation, including opening space between floors and up to a skylight.

Steve Hoyng, Resident District Manager for the Restaurant Group, stated, “We are excited to be a part of this concept that integrates innovative dining options with social and academic collaboration. Dining is a major player in the total WKU Experience, and this partnership with WKU Libraries will further elevate this experience for all in our WKU family.”

David Broz, Principal in Charge for Gensler, said The WKU Commons “establishes a new model for campus libraries as centers of social plus academic opportunities that better mirror the world they will work in post-graduation. No longer is a library simply a repository of books and quiet studying. We now look at campus environments with a need for common spaces and places for students, faculty and staff to interact in multiple modes and ways—truly setting everyone up for success.”