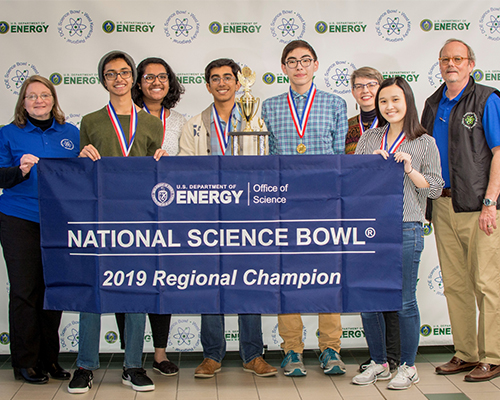 “Competing in and winning the DOE Regional Science Bowl from The Gatton Academy is one of my biggest honors,” said team captain Anas Gondal. “The hard work and practice hours we put in this year have paid off. Now, we're practicing and preparing for the National Science Bowl, where we look forward to being victorious as well.”

“For the fifth year in a row, Gatton students have successfully demonstrated our STEM-focused mission,” remarks Academic Opportunities Coordinator Cheryl Kirby-Stokes. “We look forward to representing Kentucky in Washington, D.C. and meeting up with other top science competitors and their coaches. It’s always a treat to share stories and experiences with students and colleagues from around the country.”

During the national competition, The Gatton Academy will compete in the same fast-paced, question-and-answer format that was used in the regional competition.  The students will not be answering questions during the entire trip, as they will also have the opportunity to visit national monuments and museums.

“I am proud of our students’ dedication and their hard work in establishing a strong team dynamic,” states Director of The Gatton Academy Dr. Lynette Breedlove.  “The Science Bowl fits our students' natural interest in the sciences and their love of competition.  They will be positive representatives of our school and our state at the national competition.”