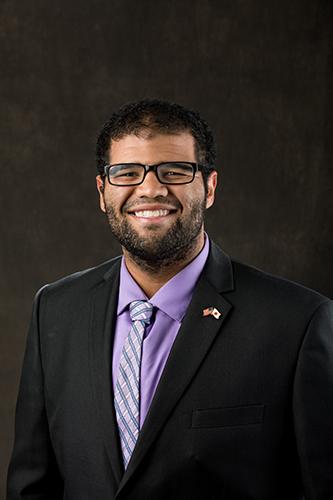 Deven Richardson of Bowling Green has been selected as a 2019 Charles B. Rangel International Affairs Graduate Fellow.  He is one of thirty fellows selected nationwide and the first WKU student to earn this honor.

The Rangel Fellowship program prepares outstanding students for careers in the U.S. Department of State foreign service.  Through the fellowship, Richardson will receive $37,500 annually for a two-year graduate degree, paid internships in the U.S. Congress and embassies abroad, and numerous opportunities for mentoring and professional development.

Richardson became interested in a U.S. foreign service career after studying at Kansai Gaidai University in Osaka, Japan through support from the State Department-funded Benjamin A. Gilman International Scholarship program.  Upon returning from Japan, Richardson participated in the Rangel Summer Enrichment Program, which confirmed his commitment to a career in the U.S. foreign service.  Through the Rangel Summer Enrichment Program, he studied political economy and the history of U.S. foreign policy at Howard University and connected with international affairs professionals.

Richardson, a political science and international affairs major, is the son of Christy Richardson.  He said that he is grateful to his faculty mentors, Drs. Craig Cobane and Timothy Rich, for their positive influence on his undergraduate experience and helping him prepare for the Rangel competition.

“It has been a pleasure to watch Deven’s growth and development over the past four years,” Dr. Cobane, executive director of the Mahurin Honors College, said. “Deven is an outstanding role model for how grit combined with appropriate support can help MHC scholars achieve life-changing success.”

Dr. Rich, associate professor of political science, added: "Deven is a highly motivated student with diverse interests in international affairs that should serve him well as a foreign service officer.”

Richardson worked with Cory Dodds, coordinator of nationally competitive opportunities in the Office of Scholar Development at WKU, in preparing his application for the Rangel Fellowship.

“Thanks to the Rangel Fellowship, Deven will be able to share his piece of the American story and represent WKU, Kentucky, and the United States abroad,” Dodds said. “We are celebrating his selection as a Rangel Fellow.”