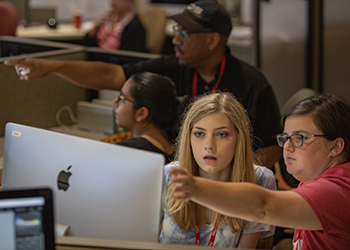 “It is a totally immersive experience,” said Director of Student Publications Chuck Clark. “They are living, eating, and breathing journalism. It is a lot more intense experience than the other workshops.”

Xposure participants live in residence halls on Western Kentucky University’s campus. They begin their day at 7:00am and finish with lights out at 11:30pm.

“You think it will be like a normal camp, and they tell you it is not,” said Haylay Watson, WKU junior from Louisville and Xposure student assistant. Watson attended Xposure during the summer of 2015 when she was a student at duPont Manual High School. “It is like you are in the real world, and they teach you all these skills. You learn how to communicate and write. You learn how to be much more open to talking to people and meeting deadlines.”

The Xposure Workshop introduces students to the basics of journalism. They learn what journalism is, how to report, how to write, and how to interview. They also learn how to shoot photos and videos and edit them. The students participate in lessons the first 3-4 days, but there is a classroom component each day.

“The goal is to expose them to a lot of things that we do. They write and tour places, but we also listen to what they want to do. We let them drive [the stories],” said Gary Hairlson, Multimedia Director at the St. Louis Post-Dispatch, who has worked with Xposure each of the 35 years. “We keep the workshops relevant.”

Before arriving at Xposure, students were asked to brainstorm five story ideas that relate to current news topics. According to Robert (Bob) Adams, retired director for Student Publications, the first night of the workshop, the students discussed the topics and decided to include features on gun safety and school shootings in the final newspaper. Six of the twelve students were assigned the topic, and they will write multiple stories.

In addition to covering national news at a local scale, students travel to Louisville to visit and cover a story on the Courier Journal, Insider Louisville, and Louisville Public Media. Students will also visit Lost River Cave and the College Heights Brewery as well as hear from several WKU alumni working in journalism fields.

While Hairlson, Clark, and Adams plan Xposure and assist students throughout the workshop, about ten staff and volunteers give students one-on-one attention during the nine days, which is just one of several aspects that set Xposure apart from other workshops or camps. The commitment to diversity and inclusion also attributes to its unique atmosphere.

“What we try to do now is pick a group that is like what you see will in the real world. We lean toward making sure we have really solid representation of people who are not represented well in newsrooms,” Clark said.

According to the American Society of News Editors’ 2017 Newsroom Diversity Survey, minority journalists make up 16.6 percent of U.S. newsrooms and 24.3 percent of online-only news organizations.

“It is important to have different voices in the newsroom. It is not just about race either. It is about all kinds of diversity,” Hairlson said.

“Back when I was interested in journalism, I didn’t see a lot of people who looked like me in journalism and that is kind of how I got into it. There was a photographer from my hometown (Henderson, KY), his name was Keith Williams. When I was about five years old, he took a picture of me in a swimming pool and I never forgot that,” Hairlson said.

Hairlson later worked at the Henderson Gleaner, attended WKU, and served as the Public Information Photographer in the early 80s when what is now known as the Xposure Workshop began. Keith Williams later won a Pulitzer Prize for his photography with the Courier Journal, and in 2015 Hairlson was part of a team that won a Pulitzer as well.

The Xposure Workshop exposes many high school students, like Hairlson years ago and Watson now, to journalism for the first time or expands upon their foundation from a high school program.

“More and more, we get people who come from schools that don’t have any kind of journalism program at all, so we are introducing them to journalism in a lot of ways. They know they have an interest in it, but they don’t necessarily have much in the way of training,” Clark said.

“[At duPont Manual High School] I was in broadcasting. I had already had some experience in video. But, I got to work with the photo student that was there [at Xposure] and I liked it,” Watson said. “Western is one of the top three journalism schools in the nation and my friends had talked about the great campus. Xposure was when I knew WKU was the school for me.”

According to Clark, it is common for Xposure participants to continue their education at WKU like Watson. Many WKU graduates and known journalists participated in the workshop over its nearly four decades in existence. Some of these graduates include: Washington Post sports columnist Jerry Brewer, Associated Press sports writer Kyle Hightower, and The New York Times report Nikita Stewart.

There is no cost to attend the Xposure Workshop, and the end products are a newspaper and digital report produced completely by attendees, videos, and a podcast—which is new this year. The students will also build the workshop’s website, which can be viewed at http://wkuxposure.com.

Clark said, “We want to remove economics when it comes to whether or not they can attend.”

The Xposure Workshop is currently seeking sponsors for the 2019 workshop. Anyone interested in learning more about Xposure can contact Chuck Clark at chuck.clark@wku.edu.