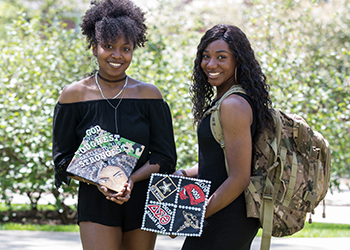 WKU graduating seniors Martajia Armstrong and LaDeirdre Mumford, both from Hopkinsville, are two cousins who came to college with a plan to finish in four years with the least amount of debt possible, and they accomplished their mission.

Mumford and Armstrong both graduated from Christian County School and came to WKU in fall 2014 to pursue health-related degrees. During their first two years, they earned financial assistance from scholarships and the Bonner Leader program. While in their sophomore year, both students worked part-time and later joined WKU’s ROTC.

“I joined the National Guard to become a part of something bigger than myself while serving others,” Mumford said.

Armstrong added, “It was after my sophomore year when I saw signs about the Guard paying for college tuition. I met with a recruiter and he told me everything I wanted to hear. At that point, I told him to sign me up, and I enlisted in the Army National Guard.”

Mumford continued in ROTC, while Armstrong adds public service as a member of Delta Sigma Theta Sorority, Inc. Both Mumford and Armstrong are part of the Army National Guard.

“As an undergraduate I met a lot of new people, joined a few organizations, volunteered until I could volunteer no more, and most importantly, I learned a lot about myself as I matured over these four years into a strong, black, independent, educated leader,” Armstrong said.

“I remember moving in to my first residence hall, then my apartment, and now out of Western Kentucky University. I was exposed to many lessons and blessings while in college. Although I will miss it, all good things come to an end. This is only the beginning. My Master’s degree is up next,” Mumford said.”

Armstrong closed with these words, “I am most grateful and proud to say that I will be the first college student in my family to finish college with a degree, and I am even more excited to start the trend for my siblings and cousins. I appreciate all the support and motivation from my friends and family.”

Both Mumford and Armstrong are the first in their immediate family to graduate from college. They collectively served more than 1,200 hours of service to the community during college earning the AmeriCorps Education Award. They will both graduate with above a 3.25 overall GPA.