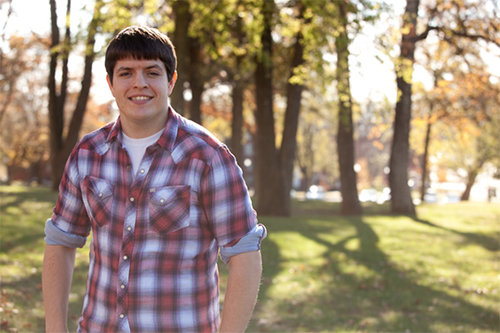 Michael Marcell, a WKU student with a double major in International Affairs and Journalism, was awarded a William Jefferson Clinton Scholarship to study at the American University in Dubai during the Spring 2011 semester.

Marcell, of Louisville, is the son of Carolyn and Charles Marcell.

“It’s an incredible honor and privilege to be able to represent WKU while pursuing a critical piece of my International Affairs education,” Marcell said.

The William Jefferson Clinton Scholarship is offered through the Clinton Presidential Foundation and the American University in Dubai. The goal of the scholarship is to give American students the opportunity to study in the Arab world.

The Clinton Scholarship will pay for Marcell’s tuition, room, and board while he is studying in Dubai.

The American University in Dubai (AUD) has an incredibly diverse student body, with undergraduates representing more than 80 nationalities. In his application, Marcell noted this multicultural environment as one of the most appealing aspects of studying at AUD, stating, “It will allow me to live in one country and develop relationships with citizens of several others.”

Marcell was first introduced to the Middle East and Islamic cultures through his year-long deployment as a sergeant in the U.S. Marine Corps in Iraq and the United Arab Emirates. His experience made him realize that he would like to return to learn about the beauty and sophistication of the Arab world outside a combat theatre.

When Marcell finished his tour of duty and returned to his university studies, he decided to focus on broadening his knowledge of the Middle East. In addition to coursework in his two majors, Marcell is pursuing a Certificate in Middle East Studies at WKU.

As part of that certificate program, he started formally studying Arabic, and is currently a student in Khiri Elkut’s Intermediate Arabic class at WKU.

Elkut, a Fulbright Foreign Language Teaching Assistant from Libya, said: “Michael Marcell is a very dynamic student all-around. His Arabic involvement also reaches the extra-curricular level: he is the vice president of the Arabic Club and through it, plans many wonderful activities for others to learn Arabic and to experience the culture.”

While in Dubai, Marcell will continue the studies of Arabic that he began at WKU.

Dr. Laura G. McGee, Interim Head of Modern Languages, said: “I am very pleased to see that Michael can experience an Arabic culture first-hand. This kind of immersion is key to learning to function professionally in a foreign language. I hope more students who begin their study of Arabic at WKU apply for scholarships to study it abroad as well.”

Marcell plans to pursue a career in federal service after graduation.

Marcell was assisted in his application for the William Jefferson Clinton Scholarship by Jeanne Sokolowski, International Scholarships Coordinator at the Office of Scholar Development.

“I knew about Michael’s desire to study Arabic in-country, in a more intense, immersion environment,” Sokolowski said. “So when I heard about the William Jefferson Clinton Scholarship this summer, I immediately contacted him.”

“Were it not for the help I received from Jeanne Sokolowski and the Office of Scholar Development staff, I’m sure I would have received a letter of encouragement rather than a letter of acceptance,” Marcell said.

“Michael is applying for everything,” Sokolowski said, “which is a smart approach, one that is already paying dividends. He could conceivably be in Dubai in the spring, in Egypt or Jordan over the summer, and in Oman next fall, and graduate with a superior level of Arabic language ability.”

About the William Jefferson Clinton Scholarships: The Clinton Presidential Foundation, in partnership with the American University in Dubai, offers 10 scholarships per semester to U.S. citizen students enrolled as fulltime undergraduates. The scholarship provides American students the opportunity to expand their educational and cultural horizons by studying in the Arab world.

About Arabic at WKU: WKU currently offers first and second year Arabic. Arabic instructors at WKU are Khiri Elkut, a Fulbright Language Teaching Assistant from Libya in 2010-2011, and Khaldoun Almousily, a teacher, interpreter and translator of Arabic who received his degrees at the University of Amman in Jordan. In spring 2011, students will have the opportunity to complete both semesters of first year Arabic on a bi-term schedule. For more information about Arabic language classes at WKU, contact the Modern Languages Department at (270) 745-2041.