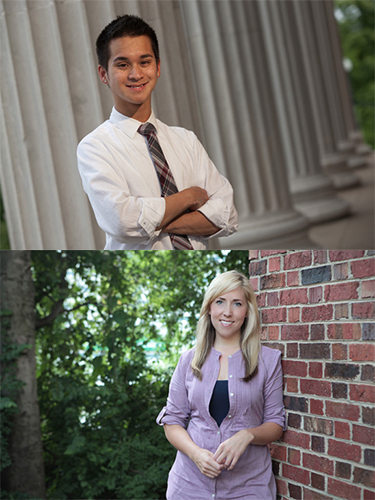 For the sixth year in a row, WKU students have been awarded Fulbright grants to spend a year studying and working abroad. May 2012 graduates Mario Nguyen and Alyssa Surina are the latest recipients.

Nguyen, the son of Patty Nguyen, is a public relations major from Dallas, Texas. He has been awarded the Fulbright-Garcías Robles Binational Business Grant to Mexico, which is a specialized grant that places recipients in internships with Mexican businesses or non-governmental organizations while enrolling them in MBA programs at a local university. The program offers grantees full support including travel to and from Mexico, university tuition, and a monthly stipend to cover living expenses.

This will be Nguyen’s first time abroad, but he considers it to be a natural extension of his experience at WKU.

“WKU emphasizes its ‘International Reach,’ and the Fulbright program really takes that mantra to a new level,” he said. “Last semester I took a course on Cultural Communication where we were given the opportunity to interact with international students from all over the world. I will now use these skills in international networking as I move forward with the Fulbright, forever building a network of colleagues from around the globe.”

Nguyen expects his Fulbright year will give him valuable international business experience, which is ideal for meeting his goal of becoming an attorney who helps businesses relocate internationally or serves on tribunals resolving international disputes.

“Over the next year, I really hope to learn more than I ever have before. I want to immerse myself in Mexican culture, perfect my competency in Spanish, and make a difference in the relations between Mexico and the U.S. in whatever capacity I am placed in,” he said.

Fulbright candidates spend several weeks and sometimes several months collecting application materials and drafting and revising their essays with Dr. Melinda Grimsley-Smith, who serves as WKU’s Fulbright Program advisor in the Office of Scholar Development. The hard work can be a valuable learning process, as Nguyen discovered.

“My application process was a learning experience. There were times I got frustrated, but for the most part I was excited and continually found moments of clarity for my future aspirations. With every step through the process, I found out more and more about what I want out of life,” he said.

“We often tell students that writing is thinking on paper, and that they get as much out of the writing process as they put in,” Grimsley-Smith said. “Mario is a perfect example of this. He might have been frustrated from time to time, but he stayed focused on his end goal. We could not be more pleased nor proud of him.”

Surina is a Math and Economics double-major from Santa Clarita, Calif. She has been awarded a Fulbright Research Grant to study mathematics education in Xi’an, China. Surina is a member of the WKU Chinese Flagship Program and has studied in China three times while a WKU student. She will continue her language education at CET Harbin in China this summer.

“At WKU, I was given unique opportunities to study in China, and to tailor my classes to develop the analytical skills necessary to understand the global economy,” Surina said. “The Fulbright will be a continuation of the research preparation and international focus I cultivated at WKU.”

Surina’s research examines how the Chinese education system influences teacher and student motivation. She plans to spend four months studying math pedagogy and working with researchers in an experimental education lab in Xi’an. Afterward, she will spend six months observing elementary school math teachers in the classroom. The goal of her project is to create a professional development seminar for teacher networks in the United States geared towards improving math education.

“While I am certainly not the first American to study China’s education system, I believe that my background in economics and institutional change will give me a more accessible and actionable perspective on why students in China continue to outperform students in the West on standardized math tests,” she said.

“Applying for the Fulbright helped me learn how to better communicate my research goals and strategies. It’s certainly a long application process, but you learn a lot about yourself through it,” she said.

After her Fulbright year, Surina plans to enroll in a graduate program in international economic development. She will build on the research experience and insight into how institutions affect performance she gains in China, and hopes to work with the World Bank in the future, helping develop solutions for the alleviation of poverty.

About the Office of Scholar Development: The Office of Scholar Development is committed to helping WKU students in all majors and degree programs develop the vision, experience and skills to be independent, engaged scholars. OSD welcomes the opportunity to work with students interested in the Fulbright U.S. Student Program or other similar opportunities.