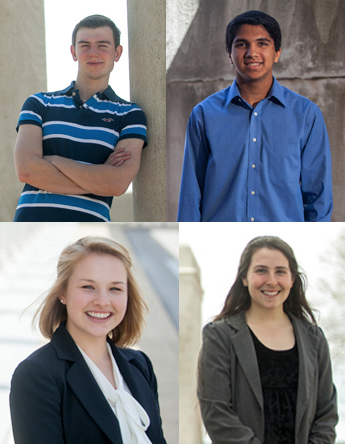 Photo Caption: Four WKU students have been recognized by the Barry M. Goldwater Scholarship and Excellence in Education Program. Top from Left: John Andrew Cliburn of Cloverport and Nitin Krishna of Corbin. Bottom from Left: Megan Laffoon of Louisville and Gretchen Walch of Alexandria.

All four WKU students nominated for the Barry M. Goldwater Scholarship and Excellence in Education Program have been honored by the premier award for undergraduates pursuing careers in science, mathematics or engineering.

“Since American colleges and universities can nominate four students for the Goldwater Scholarship, we are most proud that all four of our nominated students are being recognized,” WKU President Gary Ransdell said. “This is big news in higher education. More importantly, this award presents a great opportunity for these students as they each prepare for PhD studies and careers in Math and Biology. Their success validates the academic strength WKU provides, especially in the sciences.”

Kevin Williams, Associate Professor of Chemistry and chair of the WKU Goldwater Committee, echoed his pride in the students and their accomplishments leading to the awards.

“For the past several years, we have had a number of students receive scholarships and honorable mention recognitions from the Goldwater Foundation, and these students have been distributed across a variety of departments and majors throughout Ogden College,” Dr. Williams said. “These awards are a testimony to the quality of our students and our faculty mentors at WKU.”

Cliburn, the son of John David and Catherine Cliburn, is studying mathematics as a WKU sophomore and Gatton Academy of Mathematics and Science student. His career goal is to earn a PhD in mathematics, conduct research in dynamical systems and differential equations and teach at the university level. He has studied abroad at Harlaxton College in Grantham, England, and at the Cloudbridge Nature Reserve in Costa Rica.

“John is an exceptionally talented student,” said Dr. Lan Nguyen, Associate Professor of Mathematics and Cliburn’s mentor. “He truly loves mathematics and is passionate about mastering it. I really enjoy working with him and am very excited about his achievements.”

Krishna, the son of Rekha and Anatha Krishna, is studying mathematics and computer science. A WKU sophomore and Gatton Academy student, his goal is to earn a PhD in applied mathematics, conduct research in mathematical biology and teach at the university level. Krishna spent last summer on a Gatton Research Internship Grant focusing on his research.

“He is an excellent student who is highly motivated, especially when he gets a challenging problem,” Dr. Schugart said. “I am really excited for him and his accomplishments.”

Laffoon, the daughter of Jeannie and Glen Laffoon, is a biology major who plans to graduate in 2016. She is a student in the Honors College at WKU and the Chinese Flagship Program and is traveling this summer to Taiwan for an intensive Chinese language program. Her goals include earning a PhD in conservation ecology and conducting research in environmental restoration.

Laffoon is combining her love of the Chinese language with a desire to make a difference by studying ways to combat the problem of karst desertification in China caused by deforestation, according to her mentors, Biology Professor Dr. Albert Meier and Geography and Geology Professor Dr. Chris Groves. Dr. Meier said the problem impacts millions of people by creating problems with water supply and agriculture through soil erosion.

“Finding solutions to these problems in an active area of research within China and learning about it was immediately appealing to Megan,” he said. “There is an obvious nexus between her interests in environmental science and China, and there was a special appeal to her clear sense of wanting to work in applied studies that might actually make a difference in helping people and somehow improving quality of life, and all of these elements were present.”

Dr. Meier said Laffoon is “intelligent, creative and curious, but this would not have been enough if she had not shown the spirit of caring and giving that has inspired her work, and the preparation that allowed her to recognize and make the most of opportunities.”

Walch, the daughter of Jill and Patrick Walch, is studying biology as a WKU sophomore and Gatton Academy student. She plans to earn a PhD in bioinformatics, conduct research in genetic disease modeling and teach at the university level. She has studied English literature at Harlaxton College in Grantham, England, conducted conservation and ecology research at the Cloudbridge Nature Reserve in Costa Rica, interned in Washington, D.C., with the Peace Corps Headquarters and conducted summer research at the University of Southern Maine.

Dr. Rodney King,  Professor of Biology and Walch’s mentor, said he was pleased to see her research potential recognized at the national level. Dr. King worked with Walch during her first research experience at WKU during her first semester at the Gatton Academy, the Genome Discovery and Exploration course.

“She demonstrated the motivation responsibility and perseverance that research requires,” he said. “She performed so well that I asked her to serve as an undergraduate teaching assistant the following fall. Gretchen has a bright future and I am confident she will reach her goals.”

All of the students credited WKU’s Office of Scholar Development with assisting in the application process.

“OSD has led me to map out a plan through which I can grow toward my goals in research, study abroad, and in my career,” Walch said. “In the application process, Dr. Audra Jennings helped to review countless drafts of essays and proposals and gave me tips about the nuances of the application, which allowed me to craft an informed application packet all around.”