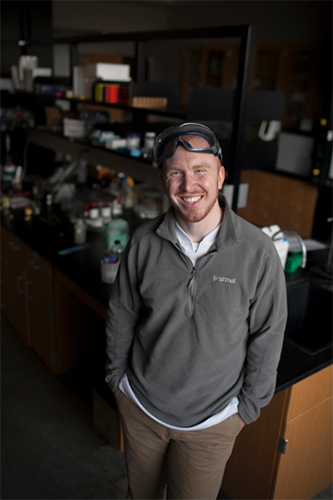 Hendrie, son of David and Lynne Hendrie of Elizabethtown, will graduate May 17 from WKU. He will use a Fulbright Research Grant to enroll in intensive German language courses for two months beginning in August and then conduct research in Heidelberg for 10 months.

A student in the Honors College at WKU, he was also awarded a DAAD (German Academic Exchange Service) Study Grant from the German Research Foundation for the same research.

Hendrie will build on research he started while participating in the DAAD Research Internship in Science and Engineering (RISE) Program. During the summer of 2013, he collaborated with a computer scientist from Karlsruhe Institute of Technology to develop training software, and recruited expert laparoscopic surgeons to complete full operations on the Heidelberg Laparoscopic Intervention Operating Simulator (HELIOS) phantom body. The simulator records the surgeon’s movements that can be used to establish parameters such as economy of movement and efficiency.

“As a part of my Fulbright Research Grant, I will work with laparoscopists to establish these parameters and create expert models of the instruments’ paths and movements,” he said. “Furthermore, we will compare this training system to previously validated training modalities and curricula.”

Hendrie’s research at WKU began in the summer of 2012 when he was accepted into the National Science Foundation-funded Biotechnology REU (Research Experiences for Undergraduates) at WKU and begin working with Dr. Kevin Williams, Associate Professor of Chemistry. He has presented his research at eight venues, including two national conferences, gained co-authorship on a publication in the journal Inorganic Chimica Acta, and successfully used it as the basis of his Honors thesis.

“Jon has made great efforts to become a highly engaged student while at WKU,” Dr. Williams said. “In addition to performing well in the classroom, he has participated in research leading to publication and has aggressively pursued opportunities to study abroad.  These awards are a testimony of his hard work and dedication, and I am confident that his time in Germany will be mutually beneficial for Jon and those with whom he interacts.”

Hendrie said his mentors at WKU and abroad as well as the Office of Scholar Development at WKU have been instrumental in his successful application for research opportunities.

“OSD has provided my springboard to becoming competitive in national scholarships,” Hendrie said. “Starting my studies at community college, I never could have imagined being not only a finalist, but an awardee for some of the most competitive and prestigious research programs in the world. They have shaped and reshaped my personal statements and grant proposals, provided funding for professional opportunities both domestic and abroad, and shared invaluable insight into application processes and how to make them successful.”

When Hendrie returns, he plans to use his experiences in medical school.

“I am interested in all facets of medicine and culture and look forward to matriculating into medical school upon my return to the United States to pursue a career in medical research with international collaboration.”