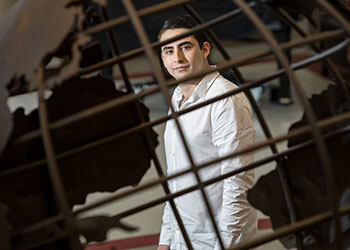 From the time he left his hometown of Arequipa, Peru, WKU Management and Economics senior Flavio Chavarri set out to make the most of receiving an education abroad. Chavarri is the President and Founder of the Beta Gamma Omega multicultural fraternity, the chairman of the Council of International Student Organizations (CISO), the President of WKU Business without Borders, an international student diplomat, an ESLi Ambassador, and a member of the Gordon Ford College of Business Dean’s Student Advisory Council. Last semester, Chavarri also served as a senator for WKU SGA.

For Chavarri, the motivation to be involved in campus life is not just to create a robust résumé or network with peers. Instead, it’s deeply personal.

“I was about to leave WKU because my mother did not have enough money to pay for my education. But the International Student Office believed in me,” said Chavarri, “From the very first day I arrived here I have always been welcome. I feel the best way to say thank you is by doing great things for international students.”

To make this a reality, Chavarri is working to integrate all international student populations into the Council of International Student Organizations (CISO).

“CISO is a powerful tool for international students, enabling them to build bridges between organizations,” said Chavarri. “We are able to make students from different organizations meet and plan partnership events together. It helps us have better representation on campus and plan different activities in order to help international students have a better experience,” he said.

Upcoming CISO events include focus groups designed to hear the needs of international students, a leadership seminar, an international Olympics event, and hosting a national conference for the presidents of other universities’ CISOs. The group will also host a Parade of Flags during this year’s homecoming parade and will have one representative for homecoming queen, representing WKU’s many diverse international student groups.

Behind all the planning and coordinating is an unbridled passion and embodiment of the spirit of WKU. Chavarri attributes this to two members of the Hilltopper family who have had great impact on his WKU experience.

“I cannot be more grateful for my advisor Judy Scott. She is the one who encouraged me to be involved on campus. She nominated me to get a scholarship when I needed it the most. Without her help, I would not be here at WKU about to graduate. My family and I will always be grateful to her,” said Chavarri. Another significant influence on Chavarri’s success is his scholarship donor, Dr. Zuhier Sofia. “Meeting him was a fantastic moment for me,” said Chavarri. “He motivated me with all his stories as a student and entrepreneur and all his generosity. He is my role model; my dream is to become a donor like Dr. Sofia in order to change the lives of future international students the same way that he changed mine.”

Chavarri sees his time at WKU as more than an opportunity to receive an education and participate in another culture. He values his time on the Hill as a chance to make a lasting difference in the lives of the international student body.

“My purpose at WKU is to make all international students feel that WKU is their second home and make it the best I can by creating organizations, doing events, or just bring their friends here,” said Chavarri. “The strength of WKU students lies in their differences, not in their similarities.”