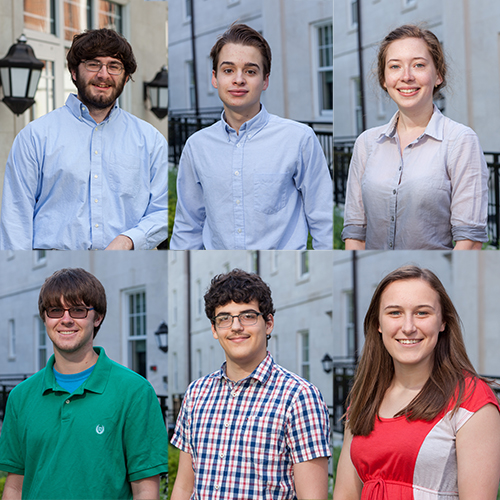 Six students at the Carol Martin Gatton Academy of Mathematics and Science in Kentucky at WKU have received nationally-competitive scholarships for immersive, critical language study this summer.  They will travel to China, Estonia, and Morocco.  While Gatton Academy students received National Security Language Initiative for Youth (NSLI-Y) scholarships every year for the past seven, six recipients marks the highest number of awards in a single year for the school.

The recipients crafted their applications throughout the fall semester with help from staff in the Office of Scholar Development and The Gatton Academy.

Banaszak will return to China for intensive language study with his NSLI-Y scholarship this summer.  He previously traveled to China during spring break 2016 with a Gatton Academy-WKU Confucius Institute research-intensive program.

He is the son of Colleen and Terry Banaszak of Crestwood.  A second-year Gatton Academy student, Banaszak is currently enrolled in his fourth level of Chinese Flagship courses at WKU.

Banaszak said he applied to the NSLI-Y scholarship “to gain a better understanding of Chinese and learn more about the differences in lifestyle and culture between the United States and China.”

During Banaszak’s two years at The Gatton Academy, he has also studied abroad in England and Greece.  He has performed mentored research with Dr. Sanju Gupta in the WKU Department of Physics and Astronomy.

Ewing will continue his study of the Chinese language this summer with his NSLI-Y scholarship.

Ewing is the son of Tanya and Dr. Robert Ewing of Lexington.  A first-year Gatton Academy student, he is currently in his second-level Chinese course in the WKU Chinese Flagship program.

Ewing acknowledged the levels of support he has received to reach this opportunity.  He stated, “I am extremely grateful to my parents, my professors and instructors within the Chinese Flagship, and the faculty and resources of The Gatton Academy for helping me make this dream a reality.”

Since starting at The Gatton Academy, Ewing has also traveled abroad in Greece.

Leibman will travel to Estonia for intensive Russian study with her NSLI-Y scholarship this summer.

A first-year Gatton Academy student, Leibman is the daughter of Maria Margulis and Alexander Leibman of Prospect.

“The NSLI-Y Russian summer program will allow me to immerse myself in Russian language and culture. I look forward to getting to know both my peers in the program and native Estonians,” Leibman said.

In addition to language study, Leibman is involved in a mentored research project with Dr. Lance Hahn of the WKU Department of Psychological Science.

Luckett will return to China with his NSLI-Y scholarship this summer.  He previously traveled to China during spring break 2016 with a Gatton Academy-WKU Confucius Institute research-intensive program.

Luckett is the son of Wendy and Daniel Luckett of Versailles.  As a second-year Gatton Academy student, he is currently enrolled in his fourth-level Chinese Flagship course at WKU.

Luckett is looking forward to the immersive language setting.  “I hope to greatly improve my language skills in a short amount of time,” he said.  “I also wish to understand the country's culture and people in a way that learning Chinese in the United States could never provide me.”

In addition to his previous travel in China, he also studied abroad with WKU in Costa Rica.

Poole will continue Chinese study on the NSLI-Y scholarship.

He is the son of Ron and Lisa Poole of Central City.  Poole is a first-year Gatton Academy student and is currently in his second level of Chinese in the WKU Chinese Flagship program.

Poole is looking forward to practicing already-honed skills and picking up new vocabulary in China.  “I expect to become very comfortable with the vocabulary I already know, and I will work at listening to learn natural and practical words and phrases,” he said.

Poole has also traveled abroad in Greece since starting at The Gatton Academy.

Sarver’s NSLI-Y scholarship will take her to Morocco for study this summer.

She is the daughter of Laura Beth and Timothy A. Sarver of Elizabethtown.  Sarver is involved in her second semester of Arabic study with WKU’s Modern Languages department through The Gatton Academy’s STEM + Arabic curricular path.

Sarver anticipates personal growth from her first trip out of the country.  “I expect to grow up some.  I think it’s impossible not to grow up when you’re exposed to so many new things in such a short amount of time.  I most look forward to the people, places, and experiences I will encounter this summer.”