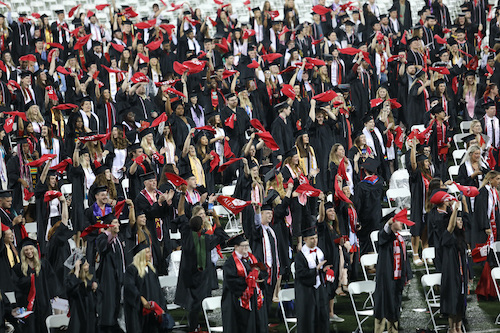 Light rain couldn’t dampen the enthusiasm of graduates Thursday evening as they made their way into Houchens Industries-L.T. Smith Stadium for Western Kentucky University’s 191st Commencement.

As rain ended and the sun peeked through the clouds, President Timothy C. Caboni noted that WKU’s newest alumni faced the most trying set of circumstances experienced by any group of college graduates in recent memory.

“Through the interruptions and obstacles created by an unprecedented global pandemic and the devastation caused by the historic December storm, you have endured so much,” he said. “But your steadfast grit and perseverance, coupled with your relentless drive to succeed, has brought you to this point.

“Your commitment to purpose, your determination of spirit and your limitless resilience have served you exceptionally well. And if ever there were a graduating class that deserves to celebrate crossing the finish line, it is you!”

Student Government Association President Matthew Wininger reminded fellow graduates that their WKU experience has been transformative. “We came here to earn a degree, but we leave here with so much more,” he said.

“WKU’s mission is to prepare students of all backgrounds to be productive, engaged, and socially responsible citizen-leaders of a global society. Our WKU experience has done just that,” Wininger continued. “Strengthened by the unusual and unprecedented set of circumstances that we faced, we are now prepared to take on whatever lies in front of us. Through these hardships, our light shined and the Hilltopper spirit persisted.”

Ahmet Kaan Aydin of Istanbul, Turkey, who received a master of science in Applied Mathematics, was recognized as the John D. Minton Award recipient. The Graduate School’s top award is named for Dr. John D. Minton, who was a history professor and WKU’s first graduate dean and served as vice president for Administrative Affairs and as WKU’s fifth president. (#WKUGrad: Read more about Ahmet Aydin)

Nicholas Barth of Alvaton was the Spring 2022 as Ogden Foundation Scholar. He earned a bachelor of arts with double majors in Psychology and German, in addition to a minor in Clinical and Community Behavioral Health. (#WKUGrad: Read more about Nicholas Barth)

WKU recognized graduates and those in attendance who are serving in the U.S. military or are military veterans.

On Friday at Diddle Arena, WKU’s five academic colleges will host recognition ceremonies to celebrate the accomplishments of their graduates who will walk the line and shake hands with President Caboni.

The ceremony schedule is: College of Health and Human Services, 8 a.m.; Potter College of Arts & Letters, 10:30 a.m.; Ogden College of Science and Engineering, 1 p.m.; College of Education and Behavioral Sciences, 3:30 p.m.; and Gordon Ford College of Business, 6 p.m. The ceremonies will be broadcast by WKU PBS and will be streamed on WKU’s YouTube and Facebook pages.

WKU is expecting heavy traffic throughout the day. To accommodate traffic flow for graduates and guests, WKU Parking & Transportation is providing parking recommendations for each ceremony, including shuttle service to Diddle Arena, at https://www.wku.edu/commencement/directions.php as well as live updates at https://www.wku.edu/eventparking. More: Event parking information; #KnowParking video; parking map

The Gatton Academy of Mathematics and Science will recognize 77 students from 37 counties in the Class of 2022, its 15th graduating class. The ceremony will begin at 2 p.m. Saturday at Van Meter Hall. Speakers will include Bruce Kessler, Claus Ernst and Uta Ziegler.