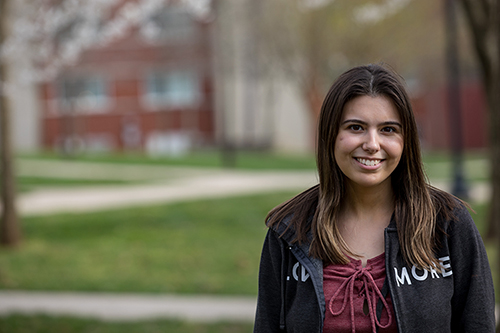 Madelynn Einhorn is a senior from Oakwood, Ohio, double majoring in Political Science and Economics with a certificate in Geographic Information Systems. She initially came to WKU because she was recruited for the WKU Forensics team and has continued to build on that experience throughout her college career. She states, “The speech and debate team has been a really big part of my life for the last four years. Having the opportunity to be among some of the best public speakers in the country is just incredible.”

While at WKU, Einhorn has had the opportunity to conduct research with Dr. Timothy Rich, Associate Professor of Political Science, on East Asian cultures and public opinion. This research has been published in multiple news outlets like The Diplomat, The National Interest, The Hill, as well as other peer-reviewed publications such as Korea Observer. Einhorn is currently writing her Mahurin Honors College thesis on the factors that influence yearly deportations in the U.S. as well as public opinion on deportations. She also holds an informal leadership role as a senior helping younger students plan research ideas and read over their writing the same way prior upperclassmen did for her. Einhorn credits these research opportunities as playing an important part in her time at WKU.

“[Research] has been really rewarding because I've gotten to actually think about questions that I'm interested in and what people haven't asked, so that has definitely been an amazing experience."

She also completed an internship in Summer 2021 with the Federal Reserve. Reflecting on her internship, Einhorn says, “The public speaking skills I've learned from debate, as well as a lot of the skills I've learned from my classes, helped me get an internship with the Federal Reserve and I was offered a job with them after I finish my graduate program. I think I've been lucky in getting my classroom skills and student organization skills and being able to apply them to my future.”

Along with research and internship opportunities, Einhorn has been able to take multiple trips abroad as a student at WKU in both formal and informal study abroad programs. She went to Morocco in 2019 through WKU’s Study Abroad program and visited Taiwan during their 2020 presidential election with other students and faculty in the Political Science department.

“One experience that really stood out to me was studying abroad. I studied abroad in Morocco between my freshman and sophomore years of college, and I had a really wonderful experience. In 2020, Dr. Rich and a couple of other students and I went to Taiwan during the elections, and it wasn’t a formal study abroad, but it was incredible. I got to watch the election, watch the votes be counted, and go to political rallies. I got to experience this amazing place and didn’t really have the stress of classwork at the same time. It definitely impacted my career trajectory because now I know I want to do something related to East Asian politics and I got to experience a whole new culture which was amazing.”

Einhorn stated that the best part of her WKU experience has been the friends she has met along the way.

“I'm so lucky I have a really great family who supports me back in Ohio, but I have so many amazing people that I've met here at WKU as well. Three of my best friends in college I've met just through Dr. Rich and doing research. I couldn’t imagine going anywhere else and not knowing the people that I've met. I’m just so happy to know that in 10, 20, or 30 years, I’ll have a lot of the same friends that I had the privilege of going to college with.”

When asked about the advice she would give to prospective students coming to WKU, Einhorn says to take advantage of all the opportunities available to you.

“I would say that WKU has so many resources available to students. but you just have to go and ask for it. Go talk to professors and older students and you will get a lot of the resources that you're looking for. I think that makes WKU unique. We have so many funds for studying abroad, for conducting research, and so many additional scholarships that you can earn. There’s so much that’s given to students here and other universities don’t quite get those same opportunities.”

Einhorn graduates this Spring and plans to pursue a Mastersdegree in Geographic Data Science from the London School of Economics and Political Science in London, England.

To learn more about earning a degree in Political Science at WKU, visit https://www.wku.edu/political-science/

To learn more about earning a degree in Economics at WKU, visit https://www.wku.edu/economics/