For White Squirrel Weather, tornadoes are 'the kind of thing we have been training for' | Western Kentucky University Skip to main content 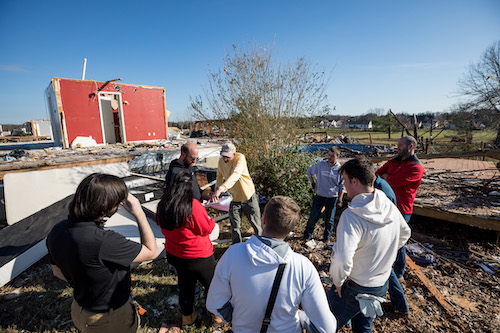 “I feel like that was the kind of thing we have been training for over the past five years or so,” said Dr. Durkee, who directs WKU’s White Squirrel Weather. “We watched the event a few days in advance and sent our forecasts to the university leadership. We communicated on our social media all the way down to the warning that said, ‘take cover now’.”

On Dec. 8 and 9, White Squirrel Weather alerted its Twitter followers to stay weather aware as the threat for damaging winds and possible tornadoes continued to increase for Dec. 10. Then on the morning of Dec. 10, the team urged followers to stay alert as the severe threat continued on track for later that night and early the next morning.

A deadly tornado devastated subdivisions off of Russellville Road then caused extensive damage near the WKU campus on Nashville Road and along the 31W Bypass.

For the next six days, Dr. Durkee and his students surveyed the damage across Bowling Green. “Our main role was going in and doing the forensic analysis to help the National Weather Service assess exactly what happened with the event,” he said.

Students were in disbelief that Bowling Green took a direct hit by an EF3 tornado. “This is a huge deal,” he said. “Things we have been looking at for a long time are completely disfigured.”

“The damage survey was an emotional experience honestly,” WKU student Dustin Knight said. “It was necessary and valuable as well though. Being out there and seeing the tragedies that took place up close is something you never forget no matter how many times you do it, but the knowledge gained is invaluable.”

Even though fall semester classes were over, students in the Meteorology program and Disaster Science Operations Center stayed in Bowling Green to assist in damage assessments, another example of WKU’s applied learning.

“The experience of working these damage surveys is definitely surreal,” graduate student John Bowen said. “We've all seen these kinds of disasters happen in movies and on TV, but when it happens to your home community it is a different experience entirely. In the classroom we talk about how these kinds of weather events happen. We know what ingredients go into a severe thunderstorm. Getting to work with the National Weather Service on damage surveys allows us to take that knowledge and apply it when we look at the extent of the damage.”

The EF scale (EF0 to EF5) is a set of wind estimates based on levels of damage to 28 indicators that include trees and various types of buildings and structures. “In a typical situation, it is quite rare for meteorologists to have direct measurements of tornado velocity,” Dr. Durkee said, “therefore, we have to rely on investigating the damage that is left behind to estimate tornado wind speeds.”

The team reconstructed the event by walking through the areas, assessing damage to structures and vegetation and determining the direction of the damaging winds.

“We started each day right after sunrise and surveyed until nightfall going from neighborhood to neighborhood,” Knight said. “Basically, what we're trying to do is estimate the wind speeds that caused the damage. At each point along the tracks, we identify the extent of the damage ranging from minor (shingles blown off, small tree limbs downed) to major (catastrophic, total destruction). Based on extensive research from engineers and meteorologists we're able to estimate the wind speeds required to produce a certain degree of damage depending on how structurally sound the damaged area was. We looked at everything from the materials used, how the foundation was built, how the structure was anchored, were there weaknesses in the structure itself. That allows us to attempt to recreate how the damage occurred to fine tune our estimated wind speeds. More importantly it allows us to identify potential weaknesses to help better design structures to mitigate damage in the future.”

Working with the National Weather Service on damage surveys in the field allowed WKU students to apply their classroom knowledge.

“As meteorology students, we are heavily educated in atmospheric physics and processes, weather phenomena and forecasting, but being able to go out with expert meteorologists and engineers lets us see the real-world impacts of what we study,” Knight said. “As much as we are interested in these events from a scientific perspective and need to study these events to enhance our understanding to improve in the future, the human impact is something that hits very hard. That's amplified even more when it's the places you work and live, people you know.”

The damage assessments didn’t end with the Dec. 11 tornadoes. On the afternoon of Jan. 1, severe storms hit Bowling Green again. Dr. Durkee’s team was in action again with the National Weather Service and determined an EF0 tornado caused damage to areas along Cave Mill Road.

And, regardless of the season, WKU Meteorology will continue to do its part to help protect the community. “We can’t control the weather but we can communicate and help the community plan for it,” Dr. Durkee said.