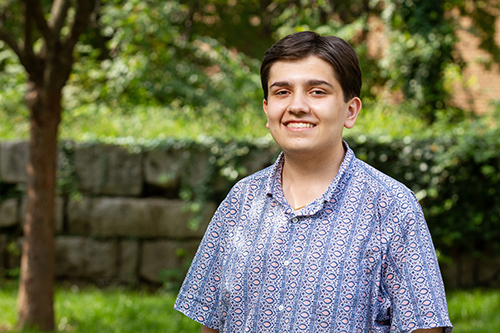 Arivumani Srivastava of Bowling Green, a senior at The Gatton Academy, has secured a $1,500 grant for the Hardin Planetarium to update museum displays. Hardin Planetarium is a free, public planetarium situated on the campus of Western Kentucky University.

Plans include expanding information on the James Webb Space Telescope, Mars exploration, the far side of the Moon, meteors, and the politics of space exploration. Hardin Planetarium hopes to have the new displays installed by early 2022.

The grant is part of the Doctors Mody Service Learning Competitions for Young People administered through The Center for Gifted Studies at WKU.

Srivastava has volunteered for Hardin Planetarium since 2019, and considers this grant to be his capstone contribution. Asked why he chose the planetarium for this project, Srivastava explained, the planetarium “is one of the most easily accessible places for me to have an impact on my community.”

A recipient of several academic awards, Srivastava plans to study public policy in college. He is the legislative coordinator of the Kentucky Student Voice Team, where he published numerous op-eds regarding education policy, presented at state and national conferences to organizations like NOAA and the NAACP, and was cited in an amicus brief to the United States Supreme Court.

Hardin Planetarium offers its shows to the public at no charge every Tuesday and Thursday at 7 p.m. and on Sundays at 2 p.m.  The current show is Celebrations for a Long Winter’s Night, which explores the winter solstice celebrations and a possible astronomical explanation for the story of the Christmas Star. The next show, Eyes on the Early Universe: The James Webb Space Telescope, is a new creation of the planetarium and will run from Jan. 16 until Feb. 24.  A full schedule of shows can be found on the planetarium's website.