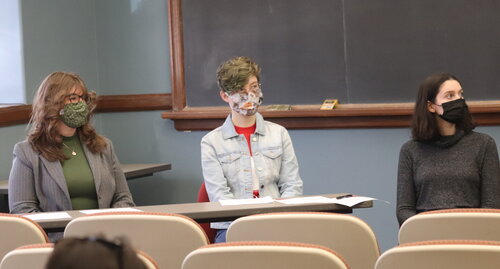 On Friday, Nov. 12, the English Department hosted the annual Undergraduate Conference on Literature, Language, and Culture in person in CH 125 and over Zoom. The annual event, coordinated this year by Dr. Gillian Knoll and Dr. Ted Hovet, featured presentations of academic papers from undergraduate students in the department that were preselected for their distinctive perspectives and academic excellence. This year was especially significant as it was the 20th anniversary of the event.

Eleven papers were selected and presented in three different panels this year. After each panel, members of the large audience engaged in a question-and-answer session with students.

“This annual event is really important, not only for the experience you get as a presenter, but for the unique opportunity to hear what your peers have been working on during their separate academic journeys. It widens the eye of what the English Department really encompasses,” Catherine Sheffield, one of the panelists, said.

Sheffield was part of the first panel, “Literature and Rhetoric,” which was moderated by graduate students Sari Shuler and Kristen Tinch. Sheffield presented her paper alongside Olivia Alsup, Bailey Alexander, and Sarah Stevens.

The final panel was entitled “Perspectives on Toni Morrison’s Beloved” and was moderated by graduate students Emily Snyder and Tori Palmore. Panelists for this section were Ellie Schueler, Valerie Feldker, and Sage Osborn.

The conference is not only a way to further spread ideas and academic interpretation through the WKU community, but it also celebrates students and their work. Many academic writers, especially student writers, may not receive feedback on their work other than comments by their professors. This event is therefore designed to help students experience a public exchange of their ideas and research.

“Presenting at the conference made me feel more accomplished in the public eye of my academic community on campus and working [in] the English department,” Sheffield said.

The conference also allows students to present the topics and ideas that they are interested in, as any paper written for an English class can be considered. Kaylee ben Yosef presented her paper which analyzed Adrienne Su’s poem, “Instant Ramen”.

“I think what inspired me the most about Su's poem though was how she acknowledged her mistake and regret at trying to ignore and erase her heritage, as most people who try to mask themselves in order to blend in usually don't acknowledge it as something they shouldn't have done and wish to take it back. I was also inspired by the idea of Americanization of a culture, because it's something that breaks my heart as I love the individuality of all cultures and wish they could all be celebrated without putting a western spin on it in order to make it acceptable in our American culture. Plus, I absolutely love ramen, so I was going to make my assignment over "Instant Ramen" no matter what I had to do,” Yosef stated.

Overall, this year’s conference proved to be a success, especially considering the event drew a large crowd while observing Covid guidelines. Those who did not submit this year are encouraged to do so at the 2022 conference as it is it an unforgettable experience for many students.

Yosef stated, “Being able to present my ideas at the conference made me feel really honored that something I wrote and was passionate about was relevant enough to our times to be able to be shared with the attendees of the conference. I was really excited to get in and told everyone I knew about it right away, because it really just felt like a huge honor.”

Presenting is not the last honor that some of the participants receive. On Tuesday, Nov. 17, the graduate student moderators announced the winners for Best in Conference for each panel.

The winner of the “Literature and Rhetoric” panel was Bailey Alexander, a senior from Danville, KY, who presented a paper entitled “Paratext for The Friend: How Audience Perspective Shapes Literary Value”.

The winner of the “Poetry” panel was Joseph Shoulders, a senior from Adairville, KY, who presented, “Are Podcasts a Return to Oral Storytelling?: Exploring the Survival of the Epic Sundiata”.

And the winner for the “Perspectives on Toni Morrison’s Beloved” panel was Sage Osborn, a sophomore from Georgetown, KY, who presented “Beloved Critical Analysis: Love in the Trauma of Slavery”.