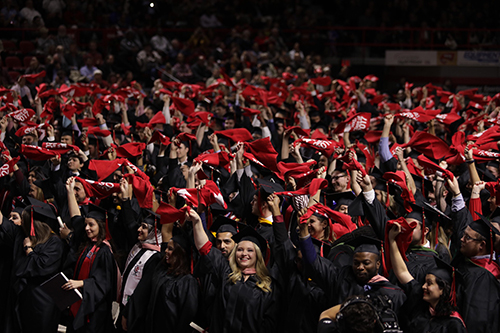 WKU’s 2018 Spring Commencement will be a two-day celebration for graduates and their families.

“We want the spring commencement to be more of a celebration and be more centered and focused on the students,” University Registrar Tiffany Robinson said.

WKU’s 183rd Commencement will begin with a University-wide outdoor ceremony at 6 p.m. May 11 at Houchens Industries-L.T. Smith Stadium followed by the Big Red Bash on the WKU South Lawn. Then on May 12, WKU’s six academic colleges will host individual ceremonies for undergraduate and graduate students at E.A. Diddle Arena. (More: View from the Hill)

“It’s a celebration,” Robinson said. “Some students have spent four, five, sometimes six years getting to this point, and they deserve an opportunity to celebrate with the people who have helped them achieve their academic goals.”

The May 11 ceremony will feature remarks from President Timothy C. Caboni and SGA President Andi Dahmer, the commissioning of ROTC cadets and the conferral of degrees along with the recognition of the Ogden Foundation Scholar (top undergraduate award), the John D. Minton Award recipient (top graduate student) and the honorary doctorate recipient. The ceremony will end with graduates waving “Class of 2018” red towels before they make their way to the South Lawn for the Big Red Bash.

The May 12 individual college ceremonies will be as follows: College of Health and Human Services at 8 a.m.; University College at 10 a.m.; Ogden College of Science and Engineering at noon; College of Education and Behavioral Sciences at 2 p.m.; Potter College of Arts and Letters at 4 p.m.; and Gordon Ford College of Business at 6 p.m.

The Saturday ceremonies, which Robinson anticipates will last no more than 75 minutes, will include the individual recognition of graduates, graduates shaking the president’s hand, in addition to other special touches the college includes in the ceremony.

“Feedback from college deans has been positive,” she said. “I think they’re excited about the opportunity to really personalize a ceremony and have that individual time with their students. I think the students and parents will both appreciate the special touches each Dean incorporates to make the ceremony memorable for the graduates.”

WKU senior Mindy Harrison works as a student assistant in the Registrar’s office and has heard about the changes since last fall. “I’m excited,” said Harrison, an advertising major who will graduate in May. “I think it will be cool because it’s different.”

Harrison said she’s looking forward to the Big Red Bash because it will provide an opportunity for parents and family members to meet some of the students’ favorite professors. “I think it will be fun and exciting,” she said.

Robinson said the Big Red Bash will be “an all-out celebration” that will incorporate the WKU Alumni Association’s Commencement Celebration and will include tents for each college, food, music, a photo booth and more. “It will definitely be a great event, and one that you will not want to miss,” she said. “We are very excited about the event and are looking forward to celebrating with the students, families and the campus community.”

Additional details about WKU’s 2018 Spring Commencement, including dates and times for ceremonies at WKU Regional Campuses and other recognition events, will be updated as they become available on the Commencement website at https://www.wku.edu/commencement/