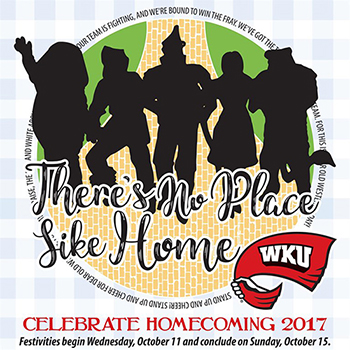 With a parade, reunions, pep rallies, award presentations, hall of fame inductions, a football game and more, WKU alumni, students, faculty, staff and friends will find There’s No Place Like Home during Homecoming 2017.

“WKU has a Homecoming atmosphere that very few universities can match,” said Ginny Hensley, director of Alumni Programming. “Regardless of when you spent your time on campus or where you call home today, Homecoming has something special for every member of the WKU family.”

Homecoming week activities will be held Oct. 11-15. Homecoming Day on Oct. 14 will feature tailgating, crowning of the Homecoming queen and the football game between the Hilltoppers and Charlotte. With the football game kicking off at 3:30 p.m., the Festival of Friends Tailgating will be from 11 a.m. to 3 p.m.

On Oct. 12, the Homecoming Chili and Cheese Luncheon and Pep Rally, presented by Junior Achievement of South Central Kentucky and the WKU Alumni Association and sponsored by Jennings Perry Schmitt Financial Group, will be held from 11 a.m. to 1 p.m. at 6.4.3 Sports Bar, 360 E. Eighth Ave., in downtown Bowling Green. Tickets are $5. Purchase tickets in advance at www.alumni.wku.edu/cc17 or at the door.

On Oct. 13, Homecoming Friday Night, sponsored by Midtown by Brookside, will be highlighted by the parade, Concert in the Park featuring the Jordan English Band and Big Red’s Roar. The parade will begin at 5 p.m. near the Downing Student Union and will make its way up College Heights Boulevard then down State Street to Circus Square Park in downtown Bowling Green. More: Parade traffic advisory; parade transit advisory; parade traffic map

“The annual Midtown Homecoming Parade allows our student body to bring the Homecoming theme to life. They work countless hours perfecting floats and making the parade memorable for all Hilltoppers,” Hensley said.

Additional Friday Night activities include “There’s No Place Like The After Party” presented by the WKU Young Alumni Council and Steamer Seafood. All young alumni and friends are invited to a social, no-program Homecoming celebration at Steamer Seafood on State Street at 7 p.m. WKU Athletics will tip off basketball season with Hilltopper Hysteria at 7 p.m. in Diddle Arena.

The complete 2017 Homecoming schedule is available on the WKU Alumni Association website at http://alumni.wku.edu/homecoming; here are other highlights: