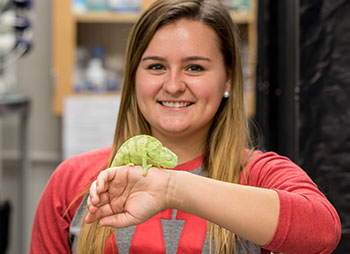 Sydnie Gordon, a junior from Taylorsville, KY, studies Biology at WKU with a minor in Chemistry and Pre-Med concentration. In her program, Sydnie is getting hands-on experience in an innovative research project that connects to her plans for the future.

Sydnie works closely with professors in the Biology department to research communication pathways in chameleons.

“Chameleons do not have ears like humans and other animals,” Sydnie said. “They make vibrations to communicate with other chameleons that are on the same branch. This is the first real study being done on chameleon communication.” She noted that WKU is one of two universities in the United States studying chameleons.

Along with fellow researchers, she studies frequencies and vibrations that chameleons emit in species with and without a gular pouch and receptors in chameleons’ feet to see how they’re able to receive those vibrations and translate them into lizard language.

In addition to getting hands-on experience in her field of research, her studies are helping prepare Sydnie for her future. “This research helps me better understand the physiology of speech and hearing and the anatomy and functional morphology of different species of chameleons,” she said.

Once Sydnie graduates from WKU, she plans to start medical school. She was recently accepted into the Early Assurance Program for the new University of Kentucky Medical School – Bowling Green campus.

“This is such a great opportunity because I get to stay in the same town and I get to be one of the first couple classes of medical students to graduate from this new school. We get to help mold the program to how we want our education to be. After medical school, I plan to stay near Bowling Green to work as a Pediatrician.”

Sydnie is thankful for the strong educational foundation WKU has afforded her, saying, “I feel that the opportunities I have received at WKU are endless. My professors genuinely care about my education and want me to succeed… If I did not attend WKU, I likely would not have had an opportunity to work in a research lab one on one with my professors, nor would I already have early acceptance into medical school. All the WKU staff work hard so that students can reach their career goals. I truly do not think you can find that at any other university.”