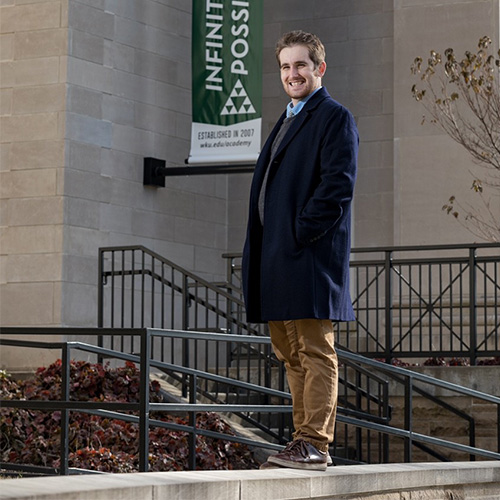 During his time as an undergraduate student in the WKU Organizational Leadership program, Owensboro, Kentucky native, Hayden Hobgood, worked in 5 different campus buildings as an RA. This ignited his interest in working with students, but he was looking for a slightly different experience upon graduation. It wasn’t until he entered into the WKU Counseling and Student Affairs program in 2019 that his career trajectory began to take shape.

Throughout his WKU experience, Hobgood felt increasingly drawn to the prestigious residential school for gifted and talented high school juniors and seniors, The Gatton Academy. “I worked with several Gatton students when was an RA,” Hayden said. “I also had a cousin that had attended the [Gatton] program, and I worked at the Wesley Foundation, a Methodist campus ministry that had a Gatton student that attended.” Now, he serves as a residential counselor within its ranks.

As a residential counselor, Hobgood’s work aligns with Gatton’s design which is to meet students where they are and provide them with the necessary real-world skills needed upon graduation. “I’ve helped teach students how to shave and proofread their college applications and have helped drive students to internships and volunteer opportunities to help build their resume,” Hobgood said. “Every staff member at Gatton is focused on the success of our students and that dedication shows.”

Due to daily work with Gatton constituents, Hobgood mentions it’s hard not to be blown away by the array of intellectual caliber. “The most rewarding thing within this line of work is watching these students change the world,” Hobgood said. “I spoke with a student that once casually mentioned she was working on an app to help FEMA organize their communication between states as casually as I would tell you my favorite food is steak,” Hobgood said. “I had a student that I was talking with while he was packing. His suitcase fell open and revealed about 6 textbooks on quantum mechanics and theoretical physics. I asked if it was for a class and he said, ‘no, just for fun’ - I wasn’t surprised when he accepted a spot at MIT a couple weeks later.” Hobgood said.

activities which includes working as a student affairs graduate associate and as a counselor for the Barefoot Republic Summer Camp.

The WKU Gatton Academy provides advanced students a hybrid high school and college experience to further challenge and strengthen their scholarly capabilities. Gatton students are supported full time by staffers with services that include opportunities for research, study abroad, and therapy, among many others. Upon graduation, students are offered a full ride to WKU. To learn more about WKU Student Affairs or The Gatton Academy, please follow the corresponding links.