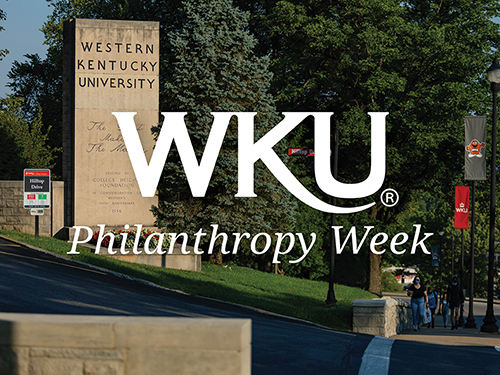 WKU Sisterhood awards 2022 grants: The WKU Sisterhood awarded $96,057.38 in grants to fund five University initiatives for 2022. During its annual fall meeting on Nov. 18, the group allocated two Impact Grants of $20,000 or more, as well as three Small But Mighty Grants for $10,000 or less. The WKU Sisterhood also celebrated reaching the milestone of 100 members, with 102 women currently part of the group. Read more

Judy Jones: A love of communication inspires a new scholarship: For Judy Jones, a love of school and learning grew to a love of communication thanks to her experience at WKU, and now she has found a way to give back through her estate plans. The Judy Hayes Jones Scholarship will benefit students pursuing a degree in Communication who are from the areas where Jones grew up – Edmonson and Grayson counties in Kentucky – and Sumner County in Tennessee, where she lives now. Read more

Loyalty Giving Spotlight: Dr. Jerry Martin: Dr. Jerry Martin, a retired family physician who practiced medicine for nearly 40 years, has given back to WKU in many ways. As a volunteer and donor for more than 60 years, he feels it isn’t his duty to give back, but rather it is a way to express his gratitude for the university that provided his education. Martin believes that philanthropy is important and simply enjoys giving back. He encourages other Hilltoppers to support WKU in any way they can, whether it be through their time or a gift. Read more

Leadership Giving Spotlight: Michelle Jones: Michelle Jones of Bowling Green, Ky., spends her days working with WKU students as a Pedagogical Associate Professor of Mathematics. A Leadership donor at the President’s Circle level and a member of the WKU Sisterhood, she gives back financially to her alma mater, and she also supports the WKU Alumni Association and the Diversity, Equity and Inclusion Council as a volunteer. Read more

Donor Spotlight: Ameerah Palacios: Ameerah Palacios, Secretary of the WKU Alumni National Board of Directors, recently made a gift to support the WKU Mahurin Honors College and looks forward to continuing to be an advocate for the future of WKU. Read more

Donor Spotlight: Jessie Varner: After his retirement from an almost 32-year career at the United States Post Office, Jessie Varner decided to attend WKU to become a substitute teacher. Varner gives back because he says WKU was a gift to him, and he wants to pay it forward. Read more