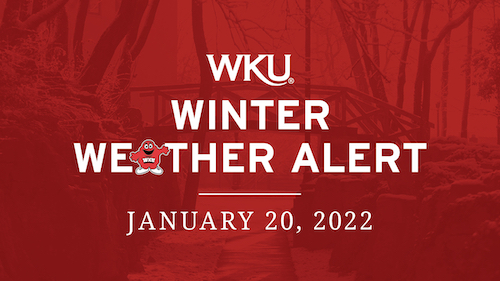 All WKU campuses will be closed and classes canceled today, January 20, due to winter weather. Only essential personnel, including adverse weather crews, emergency services personnel, and necessary food service and HRL staff, should report to campus. If unsure, employees should consult with their supervisors to determine reporting status.

All Western Kentucky University campuses will be open and classes will resume as scheduled Friday, January 21. While main roads are clear, please be alert to conditions in your area and use your best judgment when traveling to and from campus. Paths to buildings have been cleared, but some areas of campus may be slick and black ice may still be present Friday. Exercise caution when moving around campus.