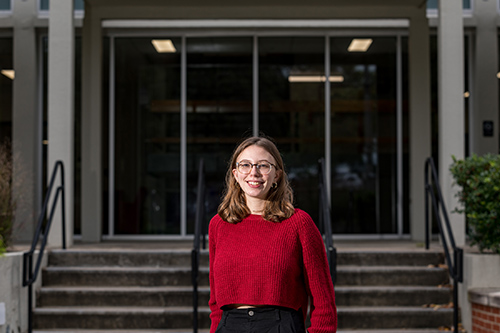 Emily Knapp is a Psychological Sciences major with concentrations in Cognitive and Clinical Psychology from Evansville, Indiana. Knapp found herself entranced by WKU’s campus during a high school tour where she said she “could tell that the students were really happy and that the college had a lot of opportunities.”

Knapp conducts research at the Lifespan Social Cognition Lab at WKU. She uses pareidolia images, a phenomenon where inanimate objects appear to have faces, to study how people perceive emotion in the faces of others. She finds this topic to be incredibly unique due to how uncommon this type of stimuli is for emotion perception research.

Knapp said her research will be used to compare emotion perceptions by age and note any differences that may be caused by the emotional context available to each age group.

“My research examines how people perceive emotion in the faces of others. For my project, we are using pictures of objects that have face-like features arranged in ways similar to how humans express emotions. By using objects instead of faces, we can reduce the influence that social biases have on the evaluation process and lead people to just focus on the features that are actually in the pictures,” Knapp explained. “We ask people to tell us what emotion they may see in each picture, and then we examine the characteristics of the language they use to respond. As we grow older, our vocabulary for emotion changes. We're tracking this change to capture growth in the subtlety and complexity of the words we use to describe people's emotions throughout adulthood.”

Knapp said she is enjoying the hands-on research opportunities offered by WKU and appreciates WKU Department of Psychological Sciences Professor Andrew Mienaltowski’s encouragement in applying for a Faculty-Undergraduate Student Engagement grant. The grant allowed them to conduct research projects and collect data from participants. She said the grant even gave her an exciting opportunity to attend research conferences and present her work.

“All of this experience really helped me gain critical skills in my field so that I can be successful in any area I pursue. I think all undergraduate students should consider getting involved with research,” Knapp stated.

Besides conducting research, Knapp also enjoys tutoring at the Suzanne Vitale Clinical Education Complex at WKU and taking time to relax by participating in yoga classes on campus.

Knapp said her WKU experience has been invaluable to her as a result of both students and faculty leaving such a lasting impact on her. She experienced the many avenues Psychological Sciences can offer and created lasting friendships along the way.

“To me, the best part of WKU will always be the people,” Knapp said.

Knapp said her future includes a Ph.D. in Cognitive Psychology where she will continue conducting research to expand knowledge of how we perceive the world. She originally planned to immediately begin obtaining her Ph.D. after finishing up her undergraduate courses, but has decided to take a break to gain more work experience before continuing her education. She said that due to the pandemic, she finds mental health to be more important than ever before and wants to take time to carefully consider the next steps of her career path.

“To me, the Hilltopper Spirit is reflected well in the school’s motto of The Spirit Makes The Master. Hilltoppers who are going into anything with a good attitude and persistent work ethic are sure to learn and succeed,” Knapp said.

For more information on a degree in Psychological Sciences, visit: https://www.wku.edu/psychological-sciences/