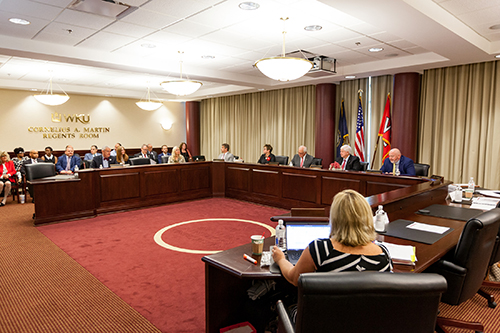 Kentucky Gov. Andy Beshear has appointed Doris C. Thomas and Phillip W. Bale to the WKU Board of Regents.

Thomas, a WKU alumna, retired earlier this year from Med Center Health and most recently served as Vice President of Development and Community Outreach. She is a Fellow in the American College of Healthcare Executives. She has served on a number of WKU boards and committees, including WKU’s Alumni Board of Directors, the President’s Circle Advisory Committee, and the Hilltopper Athletic Foundation Board of Directors. She has also served on various community boards, including the Bowling Green Area Chamber of Commerce Board of Directors.

“WKU has played a powerful role in my life,” she said. “In addition to my personal involvement, our children are all graduates of WKU. The knowledge and experience they gained on the Hill were integral to shaping the foundations of their successful careers.”

Bale is a family physician and is the founder of Glasgow Primary Care, now Graves-Gilbert Clinic, and is the founder of the Glasgow-Barren County Family Medicine Residency Program in Glasgow. He is a member of the American Academy of Family Physicians, the Kentucky Medical Association, and is the Medical Director of the Glasgow State Nursing Facility and the Hart County Health Care Center Signature Care. In addition to serving previous terms on WKU’s Board, he has served for 12 years on the Glasgow Independent School District Board of Education, serving as Chair for eight years, the Kentucky Museum Board of Directors, and the Foundation for a Healthy Kentucky Board. In June, he was selected to serve as the WKU Board of Regents Chair.

“I understand the critical role that WKU plays in our regional success and in the overall betterment of our Commonwealth,” he said. “My only agenda as Regent will continue to be a positive force in efforts to promote the mission and values of WKU.”

WKU President Timothy C. Caboni said, “Their passion for our university and our students is obvious, and they will be valuable members of a group of individuals who are determined to advance the mission of Western Kentucky University.”

The Board will next meet August 5 and 6 for its annual retreat and quarterly meeting.