View from the Hill: QatarDebate Majlis dedicated at WKU 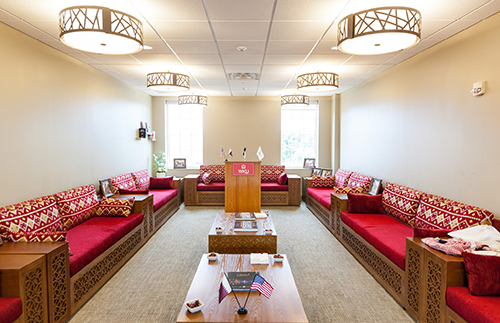 A unique study space that reflects the Arabic culture has been dedicated at WKU’s Mahurin Honors College.

WKU’s Amy Bingham has more on the impact this space will make on students in this week’s View from the Hill.

The room is called a Majlis and is the result of WKU’s partnership with Qatar Debate. Any student, not just students in the Arabic program, may take advantage of it.

“I am so excited for this space. The Majlis is a space for people to come together and really have conversations, have social interactions with each other.”

A delegation from Qatar didn’t leave out any details when dedicating a Majlis at WKU.

The authentic material and design donated by Qatar Debate make the space even more inviting.

“This is a space where people of different opinions or shared opinions meet and talk about different topics and have a good time and build relationships.”

Senior Kerby Gilstrap became interested in studying Arabic in high school.  Since being at WKU she has studied abroad in Morocco and has big plans for her future.

Now a small part of the Arab world can be found on the third floor of the Mahurin Honors College and with pandemic restrictions over, Gilstrap, who is president of the Arabic club, says the Majlis couldn’t come at a better time for students.

“This might just be our regular meeting space to bring students, have in person and have things like coffee and tea and learn about the culture, practice language and help each other out and get to know one another again.”

Gilstrap is looking forward to being on WKU’s Qatar Debate team this upcoming school year. The international competition in Doha attracts students and coaches from all over the world.