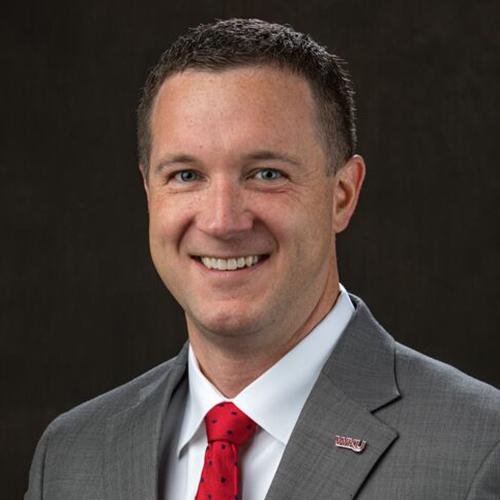 Jace Lux, currently the Director of Recruitment and Admissions at WKU, will start his new role July 1. He replaces Bob Skipper, who is retiring June 30.

“I’m excited to continue my career at WKU in this way,” Lux said. “I have enjoyed tremendously working with the team in Admissions to share information about WKU with prospective students around the country, and this new role allows me to continue sharing the WKU story while working alongside the team in Communications & Marketing in a new capacity.”

Since he became Director of Recruitment and Admissions in 2014, WKU experienced a 25 percent increase in the number of students admitted, as well as increases in admitted student yield. In fall 2020, WKU’s freshman class increased by more than 400 students from the previous year despite declines at universities nationwide.

The Evansville, Indiana, native and wife Brandy, who is also a WKU graduate, live in Bowling Green with their two sons, ages 10 and 6.

Skipper retires after nearly 35 years at WKU. The two-time WKU graduate returned to the Hill as University Photographer after spending time working for the Bowling Green Daily News and Franklin Favorite and was named Director of Media Relations a few years later.

“I have been fortunate to work with Jace on a number of projects and know he will do well in his new role,” Skipper said. “Jace will be working with seasoned professionals in Communications & Marketing who are a true team with the common goal of furthering the University’s mission through education and service.”

Skipper said that while he will miss working with his teammates at WKU, he is looking forward to starting a new chapter spending more time with his family.

“I have been extremely fortunate to have had a career with an institution and with coworkers for whom I care deeply,” he said. “I have been a Hilltopper since high school in the late 1970s and will always be a Hilltopper.”