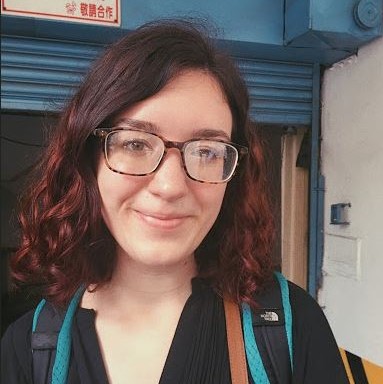 For a project in the spring 2021 Survey of British Literature I course, Aliza Norman wrote and performed a song rendition of Marie de France’s “Lanval.” In the course, one assignment option is to make a creative adaptation of a text and reflect on the process. Being a musician, Norman decided to create a song.

Norman is a senior at WKU and will graduate in December 2021. She is double majoring in Music Performance and Chinese and minoring in Literature. Norman has always loved stories, and she noticed music’s role in storytelling. Norman would listen to movie soundtracks and consider how the sounds heightened emotions and themes. She also grew up listening to Celtic songs, which told vivid tales. “My love of music stems from my love of stories,” Norman said. “I think music’s ability to bring texts to life is powerful and inspiring.”

Once she decided that she would turn a text into a song in British Literature, Norman picked a text with a strong story. “Lanval” is a 12th Century poem about Arthurian knight Lanval who falls in love with a fairy lady. Norman determined that the poem could be broken down into four sections: introducing Lanval the character, his and his lady’s first meeting, the conflict with Guinevere, and the lady saving Lanval. Norman turned each section into a stanza of lyrics by picking out the most important details. Throughout the song, she wanted to highlight the text’s themes of “unconventional masculinity” and “otherworldly love.”

“In both music and literature, you consider if something makes sense and if your message is coming across,” Norman said. To convey her ideas in lyrics, Norman pictures a physical audience listening to her song as a choir concert. Norman asks, “Are they understanding the story? Are they picking up on the themes and emotions?”

Dr. Alison Langdon, the instructor of the British Literature course, wished to share Norman’s impressive work with the public. She said, “I was blown away by Aliza’s composition, how every element—from the choice of instruments to adaptation and condensing of the lai into a ballad—spoke to the themes of the original text. It’s a fantastic example of how a creative approach can reveal multi-faceted layers of the original. Plus, it’s simply a beautiful piece in its own right!”

The creative adaptation project was a rewarding process for Norman. She discussed how, as a creator, she often hinders her productivity by overanalyzing her work. “The deadline for this project forced me to just write the song and trust my instincts,” Norman said. “Being able to create something and seeing that it turned out good brought me out of a creative slump.”

Norman said she would be interested in adapting other fairytales and folk tales into songs. In a similar vein, she is currently working on a rendition of “John Riley,” a traditional English folk ballad. Norman also writes original music, and she is working on producing an album.

Listen to Norman’s adaptation of “Lanval” on the English Department’s YouTube channel.