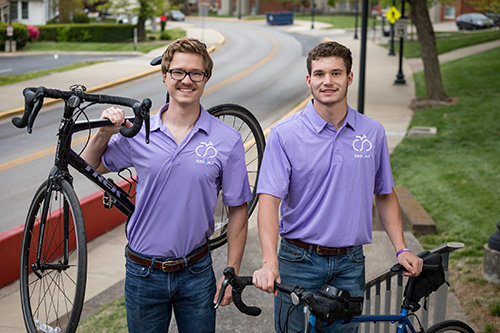 A non-profit organization founded by a WKU alumnus, Tyler Jury, Bike4Alz was founded in 2010 after Jury’s grandfather passed away from the disease. This year, 14 WKU students are striving towards the same goal that the organization started with – to bike for the cure to end Alzheimer’s.

Justin Geilear, Director of Rider Operations, and Ben Betts, Blog Manager, are two of the riders for the summer 2021 bike across the United States.

Geilear’s grandfather was diagnosed with Alzheimer’s disease, so participating in Bike4Alz is particularly significant for him.

“My grandfather has Alzheimer’s and about a year ago we put him into a memory care facility. I have been able to see firsthand the impact it has had on not only him but also my family. It is disheartening to watch. Combining being passionate about the cause and always wanting to travel, Bike4Alz is the perfect match,” Geilear said.

Betts also has a family connection to this issue, fueling his desire to give back to others.

“I knew I wanted to be a part of it the second I heard about the organization,” Betts said. “I talked to someone that had just completed the ride and heard about the impact it had and what he was able to experience. My grandfather has early-stage dementia, so it feels like something tangible I can do to benefit him and the entire Alzheimer’s community.”

Driven by that same passion, more than half of the team is back for their second summer, after the summer 2020 ride was cancelled due to COVID-19.

“There is more of a problem-solving spirit this year,” Betts said.

As a result of this problem-solving spirit, Bike4Alz has been able to make positive changes for the organization.

“We have been able to change the structure and expand our reach, rather than just plan for a specific ride,” Geilear mentioned.

Looking back on the past eleven years, Betts and Geilear are thankful for the support of the WKU community.

“Bike4Alz’s roots are at WKU – we rely on this community,” said Geilear. “WKU is home. There is this sense of pride in all attending the same university, and we rely on the WKU community every day to help support us,” added Betts.

From benefit nights to social media outreach, the WKU community has a major impact in supporting Bike4Alz.

“WKU has been the catalyst to help the organization grow. People are very curious about what we are doing. We will hear cheers while biking through campus and we feel that support,” Betts said.

Building off the WKU community, Geilear is applying concepts he learned in his management and marketing classes at WKU to better lead the team.

“As a group of young men in charge of running this whole non-profit, we run into challenges every day, and we have to brainstorm how to solve them,” Geilear noted.

Through his academic courses, Geilear learned how to effectively motivate the team and develop ideas for promoting the organization’s fundraising efforts.

“Bike4Alz has also given me more confidence in my abilities after college and helped me realize that anything is possible when you set your mind to it - a mindset that has been a part of the organization from the beginning,” Geilear said.

Since 2010, Bike4Alz has raised more than $400,000 for the American Alzheimer’s Association. This year’s team is already working to contribute to that number, and the riders hope to expand the organization’s community outreach.

“Bike4Alz will always have the goal of ending Alzheimer’s. That is something that will remain constant throughout the future of the organization. But we also want to have more of an impact nationally and throughout Kentucky,” Geilear said.

Reflecting on the experience of riding, Betts highlights why Bike4Alz is unique.

“Bike4Alz is special because it is about being a part of something larger than yourself and being part of a team that rides for the cure. There is a purity in the physical pursuit and the challenging task of actually biking across the United States,” Betts says.

The team embarks on the bike for the cure on May 18. The ride starts in San Francisco and ends in Virginia Beach - a total of 3,600 miles across the country.

“The main goal for this summer has remained the same - end Alzheimer’s disease,” Geilear said.

Visit bike4alz.org and follow @bike4alz on Instagram to support the Bike4Alz WKU students on their coast-to-coast ride for the cure.