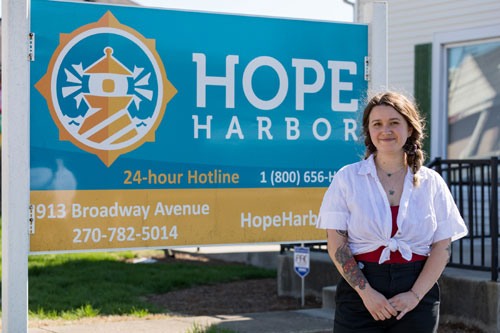 “I found this community that I realized I really belonged in,” said Psychological Sciences graduate student Kelsey Woodward of Bowling Green. By “community,” Woodward meant the group of people who bring awareness to sexual assault, advocate for survivors and create spaces of support for those impacted by it.

During her sophomore year at Western Kentucky University, Woodward invited a guest speaker from Hope Harbor, Inc., the local sexual trauma recovery center, to speak at her Psychology Club meeting. Learning about the organization prompted her to get more involved. Woodward became a Hope Harbor volunteer, and made her volunteer work the center of her graduate school research.

“Statistics on sexual violence indicate that this is a pervasive problem that many people in society will unfortunately experience,” said Woodward’s faculty mentor, WKU Assistant Professor in Psychological Sciences Dr. Matthew Woodward.  “Sexual assault survivors experience a number of mental health difficulties following their assault. Most of the work to date has focused on female survivors of sexual assault, despite data indicating that about 10% of rape survivors are men.  Much less is known about male sexual assault, and more work is needed to understand how to better address and treat problems following male sexual assault.”

“My work at Hope Harbor inspired my whole thesis and what I want to research,” Kelsey Woodward said. Her thesis topic titled “Shame, Perceived Social Support, and PTSD: Bridging the Gap Between Male and Female Survivors of Sexual Assault” looks at mental health outcomes for both female and male sexual assault survivors.

The research topic comes from years of volunteering. In 2016, Kelsey Woodward began serving as an advocate volunteering with the 24-hour crisis hotline, then later made visits to the hospital to provide support to survivors. Calls made to the hotline come from survivors or their family members and friends.

“I kept finding doors opening [to get more involved in the topic and community]. I started working at Hope Harbor, and then I found Rivendell and then BRASS [Barren River Area Safe Space]. I’ve also done research with the child advocacy center, so the community is what helps me grow the most,” she said.

Kelsey Woodward explained that she spent time as a clinical intern at Rivendell Behavioral Health Services for a semester working with youth sexual assault perpetrators ages 14-18. She also conducted research titled “The Effectiveness of Cognitive Processing Therapy on Non-Offending Caregivers of Recently Maltreated Children” for a project with the Barren River Area Child Advocacy Center.

“I’ve seen the full spectrum of how sexual assault is treated on the survivor side and the perpetrator side. That’s what made me come up with my thesis idea,” Kelsey Woodward said.

“Kelsey’s thesis is an important step forward in helping to understand and compare the impact of sexual assault between male and female survivors,” Dr. Matthew Woodward said.

“I just want people to be more inclusive in talking about survivors and providing help and services to survivors,” she said. “It is not only a woman’s problem.”

Kelsey Woodward shared that anyone who has been impacted by sexual assault can contact Hope Harbor, which can connect them with resources, support, and activities where they can get to know others who have had their life impacted in similar ways.

“If anyone ever feels lost and feels no one knows what they are going through, they [Hope Harbor] can help,” Kelsey Woodward said.

After Woodward graduates in May 2021, she plans to move to Colorado in hopes of becoming a case manager working with at-risk youth and homeless individuals who have experienced past trauma. She plans to continue her research in a doctoral program.

“Everyone is impacted by sexual assault in one way or another,” she explained. “I got more vocal as I became more involved in the community.” She wanted to make a difference, and therefore uses her research and volunteer work to do so.

For more information about the Psychological Sciences program at WKU, visit https://www.wku.edu/psychological-sciences/.