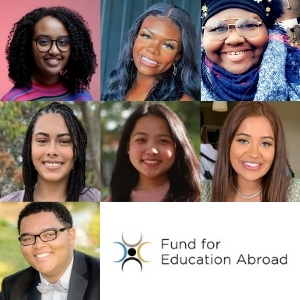 Seven WKU students were awarded Fund for Education Abroad (FEA) scholarships for study abroad in the January 2021 application cycle. The recipients earned scholarships totaling $28,075, deferrable through summer 2022 to help students achieve their study abroad goals despite disruption to higher education and international travel. With seven recipients in this cycle—the highest number in institutional history—WKU had more recipients than any other college or university.

FEA makes life-changing international education experiences accessible to all by supporting minority and first-generation college students underrepresented in U.S. study abroad, including U.S. citizens and permanent residents. In this national application cycle, 92% of awarded scholars identify as students of color, and 90% are first-generation college students. 32% transferred from community college to a four-year institution.

Bethel Aklilu of Mount Juliet is the recipient of the South India Term Abroad (SITA) Nallenaam Scholarship. Bethel, the daughter of Adey Wassie and Amha Aklilu, will study abroad in 12 countries through Semester at Sea in fall 2021, preparing her for international rights-based work. She is an English major with minors in citizenship and social justice and film studies.

Jaylyn Briggs of Clarksville will study in South Korea in fall 2021. She is the daughter of Lauren Hubbard and niece of Kenya Jones. With a major in interior design and fashion merchandising and a minor in business administration, she plans to start a furniture collection combining traditional Korean design with modern American style.

Bobbi Coffee of Louisville is the recipient of the Cyril Taylor Memorial Scholarship toward study in the United Kingdom in fall 2021. An English and sociology major with concentrations in literature and inequality and social change, Bobbi is exploring careers within the legal industry.

Summer Gary of Louisville is the daughter of Tina Gary, sister of Steven Gary, and partner of David Burke. She will strengthen her antrhopological skills in the Netherlands. With a major in anthropology with concentration in biological anthropology and minors in global health service and creative writing, she plans to work against racial disparities in healthcare.

Oo Meh of Bowling Green is the recipient of the Artigas-Etchegaray Scholarship, which will support her study in Tanzania. Oo, the daughter of Bu Reh and Klaw Meh, is a nursing major. She plans to serve others as a traveling  nurse and hopes to form a non-profit to aid refugee healthcare.

Niki Patel of Gallatin is the daughter of Manisha and Vasant Patel. Through self-confidence and hard work, she is pursuing a career as an immigration lawyer in which she hopes to open her own firm. She will study abroad in South Korea in fall 2021.

Isaiah Richardson of Bowling Green is the recipient of the NAFSA Tamara H. Bryant Memorial Scholarship. Isaiah, the son of Christy Richardson, is a computer science major pursuing a career as a software engineer working abroad. He will study in South Korea in fall 2021.

All of the students recognized in this application cycle worked with Lindsey Houchin, coordinator of nationally competitive opportunities in the Office of Scholar Development at WKU, to prepare their applications.

Coffee reflected on the value of the application process: “If there’s one thing that I’ve learned while going through the application process, it’s to not shy away from the more vulnerable aspects of your story,” they said. “It may seem uncomfortable at first, but as Maya Angelou once said, ‘There is no greater agony than bearing an untold story inside you,’ and your story deserves to be told.”

Students interested in studying abroad are encouraged to seek scholarship funding early, as students who plan one year in advance maximize their scholarship potential. Interested students are encouraged to work with Study Abroad and Global Learning at WKU to find a program best fit their goals and the Office of Scholar Development at WKU to seek funding through nationally competitive scholarships.

About the Office of Study Abroad and Global Learning (SAGL): SAGL serves the WKU community by engaging students, faculty and staff in diverse, educational and cultural experiences through faculty-led, exchange, consortia and other study abroad opportunities.