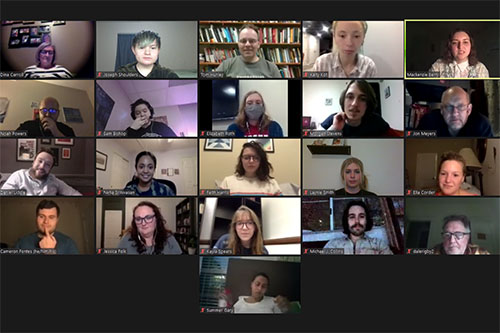 Mackenzie Berry is a poet from Louisville who is currently pursuing an MFA in Poetry at Cornell University. Before the festival, Berry led the finalists through a workshop of their poems. “Mackenzie Berry was incredible,” English Club Vice President and competition participant Noah Powers said. “Her running of the workshop had all of the finalists speaking up and genuinely participating, which can be hard when you’re all sort of hodge-podged together, and you’re only seeing the poems in that short time.”

Berry began the festival by sharing some of her poems from Slack Tongue City, her debut collection set to release in March 2022. Her poetry centered around her experiences in Louisville and touched on a variety of topics including the city’s blend of urban and rural issues and poignant reflections on lost love and death.

“Mackenzie Berry gave a fantastic reading,” English Club faculty sponsor Dr. Tom Hunley said. “She is someone that our students can both relate to and look up to.”

Powers said, “[Berry’s] reading was so wonderful—she is such a talented poet, and she reads beautifully, so it made for an amazing Goldenrod to have a poet like her as our guest for this year’s events.”

After the poetry reading, attendees asked Berry questions. In her answers, Berry discussed the poets that inspire her, her writing and revising process, her methods for beginning a collection, and how she decided on an MFA program.

Berry then announced the winners of the poetry competition, and the winners read their poems when called. Kaity Kot’s “How Many Times Have People Used a Pen or Paintbrush Because They Couldn’t Pull The Trigger?” received Honorable Mention; Adam Woodard’s “For Papa” placed third; Noah Powers’s “The Spaceman is All Alone on the Moon” placed second; and, Kayla Spears’s “I See Myself in Everything” placed first.

Powers shared his thoughts on the winners and finalists. “I do not envy [Berry] for having to choose the four subjectively best of this year’s finalists. It was a Goldenrod blessed with a lot of submissions in the first place and then with a super talented group of finalists with excellent poems to show for it,” he said. “There was not a single finalist this year who did not write a poem worthy of being top three.”

On the success of the festival, Powers said, “I’m extremely happy, as English Club V.P., with the Zoom turn out with just over thirty people showing up to listen to some poems on a Thursday night in the rush hour of semester busyness. I’m just overjoyed that in yet another pandemic-maligned semester, we were able to hold Goldenrod and celebrate these poets and poetry.”