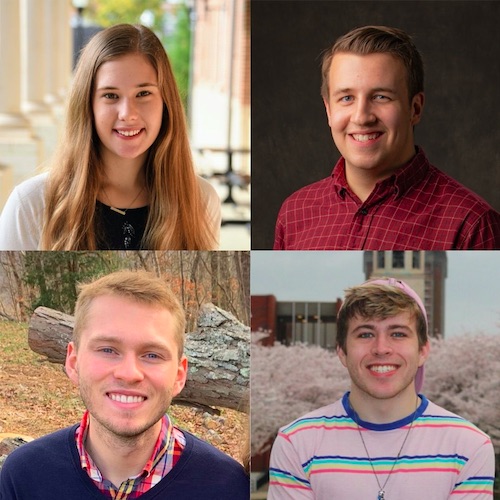 Jayden Thomas, an international affairs and political science major, earned the scholarship to study Japanese in the virtual institute administered by Okayama University in Okayama, Japan. He is a Mahurin Honors College scholar and a participant in the Master of Public Administration (MPA) Joint Undergraduate/Graduate Program (JUMP). Jayden, son of Tammy Thomas, is a resident of Glasgow. In pursuit of a career in international public service, he will complete his undergraduate study in Spring 2021.

Ryan Richardson, a Chinese, political science, and Asian religions and cultures major from Williamsburg, earned the scholarship to study Chinese in the virtual institute administered by Shaanxi Normal University in Xi’an, China. He is a Mahurin Honors College scholar and member of the Chinese Flagship Program. Ryan plans to pursue a master’s degree in Asia-Pacific studies in Taiwan, followed by a law degree with concentration in international and Chinese law. Richardson will graduate in May 2021.

Noah Moore, a public relations, Spanish, and Arabic major, earned the scholarship to study Arabic in the virtual academy administered by the Jordan Language Academy in Amman, Jordan. After graduating in May 2021, the Mahurin Honors College scholar will move to southern Spain in September to be an English Teaching Assistant (ETA) through the Spanish government. Noah, son of Pat and Mary Moore, is from Fort Thomas.

Carolyn Brueggeman, an international affairs, Chinese, and Spanish major from Florence, earned the scholarship to study Chinese in the virtual institute administered by Shaanxi Normal University in Xi’an, China. She is a Mahurin Honors College scholar and a member of the Chinese Flagship Program. Carolyn, the daughter of Teresa and Jack Brueggeman, will graduate in May 2023.

Students sought guidance from Dr. Grimsley in the Office of Scholar Development in preparing their applications. Moore, impressed with the assistance he received throughout the experience, had this to say: “I was so lucky to be supported throughout the entirety of the process (three times, actually!) by the amazing staff and faculty in OSD and the WKU Modern Languages Department, whose professors have really shaped my interest in exploring the world through language.”

About the Critical Language Scholarship: The Critical Language Scholarship Program, a program of the U.S. Department of State’s Bureau of Educational and Cultural Affairs, is an intensive overseas language and cultural immersion program for American students enrolled at U.S. colleges and universities. Students spend eight to ten weeks abroad studying one of 15 critical languages. The program includes intensive language instruction and structured cultural enrichment experiences designed to promote rapid language gains and cultural fluency. Due to health and safety concern, the majority of CLS institutes for 2021 will be offered as virtual programs.