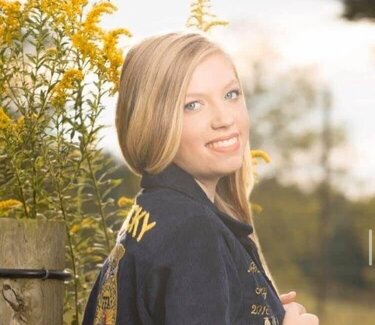 Maddie Grider was named a Baker Scholar in Horticulture for the 2020 – 2021 academic year. Grider, a senior from Mount Hermon, Ky., also received the award in the 2019 – 2020 term. She is majoring in Agriculture with a concentration in Horticulture, and she is minoring in Literature and Professional Writing. In an interview, Grider shared her experiences studying in two different departments.

Grider discussed that she was “born into agriculture.” She grew up on a farm raising cattle and setting tobacco, and she was an active member of Future Farmers of American in high school. She enjoyed being involved in agriculture, so she knew she wanted to study the subject more in college. Grider said that she decided to attend WKU after touring the campus and seeing the landscaped environment.

Grider credits the development of her passion for horticulture to the Baker Arboretum.

In the summer of 2019, Grider interned at the arboretum, where she tended to a section of the land, learned about the vegetation, and shared her knowledge with visitors. In the fall 2019 and spring 2020 semesters, Grider became involved with the horticulture on campus when she worked with WKU Resource Conservation. She documented the shrubs on campus and helped develop a GIS map for campus officials.

Grider decided to minor in Literature because she read books avidly in high school, and she wanted to continue studying the subject for enjoyment. “Taking fun classes helps break the monotony of going to school. Without that, it can be easy to lose your passion and drive,” she said. Grider also shared how she is generally the only Agriculture major in her English classes, and she enjoys providing a new perspective, one that especially complemented discussion in her Southern Literature course.

Grider added the Professional Writing minor on the recommendation of her Literature advisor, and she said she now views her experiences in the minor as invaluable to her agriculture career. Grider named the grant writing subject in Special Topics in Professional Writing as a crucial course because many agriculture businesses rely on grants. “The skills that we learned in that course—summarizing things in a good way, writing to a particular audience, being persuasive and subtle in writing—can be applied to a lot of work,” she said. Grider also discussed how she values her experiences in Editing and Publishing writing and designing a newsletter because many agriculture associations use the medium.

Grider noted how many of her Agriculture classmates do not realize the usefulness of professional writing skills. She said that many college students believe they must stick to studies related to one field. Grider advised, “Everyone should explore different classes and interests. You’ll gain a lot of different skills rather than one set of skills from one department.”

After graduating, Grider aims to raise and sell plants in a greenhouse or nursery. “With my professional writing skills that I have gained at WKU, I think I could help them create a newsletter or other branding documents to help them expand and market,” she said. Grider ultimately hopes to open her own greenhouse.