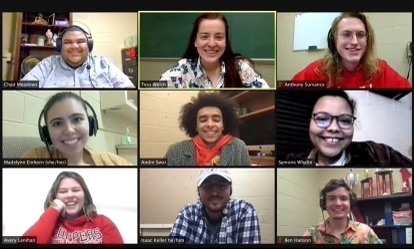 Lincoln-Douglas debate is a one-on-one policy style of debate which is sponsored by the National Forensic Association, thus the name NFA LD.

The tournament is designed to act as a capstone to the season by offering a challenging and rigorous competition right before the season ending national tournaments. After 12 rounds and nearly 30 hours of grueling competition, WKU placed in the top four of three different divisions, advanced eight debaters to elimination rounds, received nine speaker awards and earned the top two places in the “General Admission” division. These collective efforts led to WKU being recognized as the top overall team at the tournament.

At the 2021 Grand Prix, WKU competed against the University of Notre Dame, Pennsylvania State University, Lafayette College and the University of Nebraska-Lincoln, among others. WKU will face these programs and more at the first-ever virtual National Forensics Association national tournament.

Results from the 2021 Grand Prix are as follows: