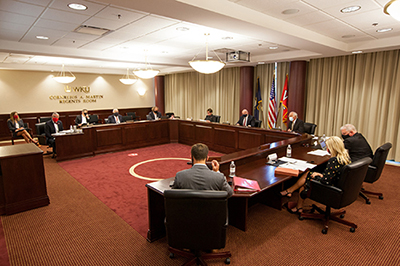 The WKU Board of Regents today (March 5) approved an addendum to President Timothy C. Caboni’s employment contract that includes retention and performance-based bonuses, a deferred compensation plan, separation payments and an increase to his base salary.

“One of our primary roles as a board is to hire and retain the university’s  president,” Regents Chair Frederick Higdon of Lebanon said. “After the outstanding evaluation he received in January and the ongoing remarkable performance increases at WKU, we wanted to ensure President Caboni remains with our university for many years to come. This contract both rewards that performance and incentivizes him to continue his leadership of WKU.”

President Caboni said he appreciates the board’s continued support, “and I look forward to the next four years as we continue working toward the goals we set in ‘Climbing to Greater Heights.’ Our success is a testament to the support we’ve built across campus and our focus on our students, our Hill and our community and beyond.

“I do not want to be any place but WKU. This is an amazing place.”

In other business during the quarterly meeting, the Board: