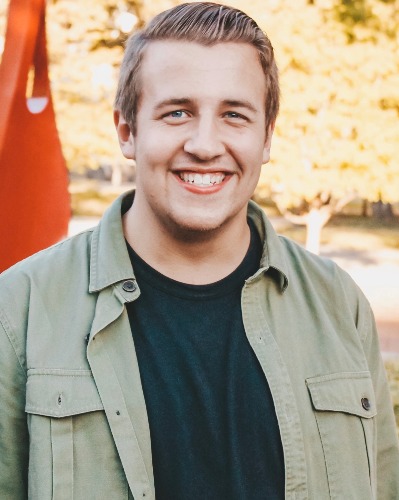 Noah Moore, a senior at WKU, studies Public Relations, as well as Spanish and Arabic. His interest in foreign languages began in high school Spanish class, but he was inspired to expand his language study due to how “globally-focused” WKU was. Reflecting on the Department of Modern Language’s faculty he says, “I love that there is a wide array of faculty that are waiting in the wings for their students to achieve and do well. They genuinely care about us, and are always so helpful.” Noah had the opportunity to study abroad with the Sol Education Abroad program in Buenos Aires, Argentina for a winter semester in 2019. Additionally, he participated in a Spanish immersion program with Concordia Language Villages, as well as helped to found the Modern Languages Ambassadors. He credits his language study for providing him with these opportunities and states, “I don’t think I would have had half of the experiences I had” without them.

After graduation, Noah plans to move to Spain where he will teach English and later pursue a Master’s in Art Administration to utilize his language skills for international arts marketing. When commenting on the fact that few native-born Americans are bilingual, Noah says, “I think the U.S. would benefit from mandatory language study because students can’t know if they’ll click with a language unless they’re exposed to it, and many underestimate just how much it can help you see the world with fresh eyes.” Furthermore, he believes that the U.S. could better “appreciate other cultures” if there were a greater emphasis on bilingualism.

Noah acknowledges that learning a foreign language is no easy feat, but he also notes the importance of persevering through these challenges.  He reflects on the challenges he has personally faced on his journey, whether they concern tricky grammar rules or memorizing vocabulary, but reminds others that “languages don’t have an end-goal; there is always something to learn, which is partially why I love them so much.” Noah encourages foreign language students to “never give up, never stop learning.”