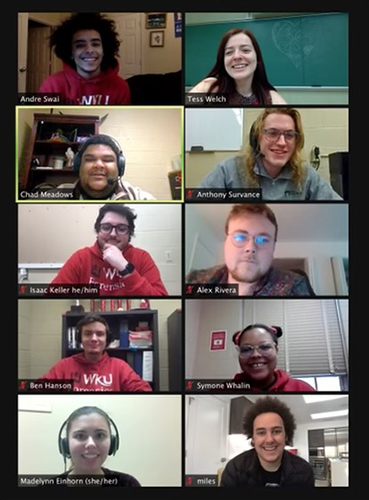 A close-out occurs when one University advances two students to the final (top two) round of competition who then share the tournament championship. Webster University’s tournament is a key competition for the WKU Debate program as it is generally the largest and most difficult event of the invitational season in Lincoln-Douglas debate.

On the way to the championship, Einhorn and Hanson won six single-elimination debates against representatives from the University of Nebraska-Lincoln, Missouri State University and Lewis and Clark College, among others.

The WKU Forensics Team also competed in individual events at the Gorlock Gala, and placed third in Individual Events and Combined Sweepstakes ahead of Simpson College and Lafayette College.

The team will compete this weekend at a virtual tournament hosted Eastern Michigan University.

Results from the “Gorlock” are as follows: