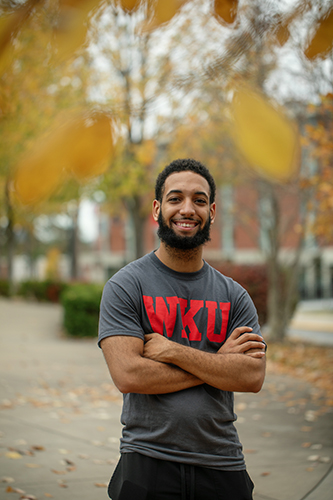 Cabrera is originally from New York. His mother relocated from the Dominican Republic before he was born, and he spent most of his childhood in New York City before his family moved to Kentucky.

As Cabrera finished up high school in Trenton, he started mapping out his plans for the future. Because he wanted to go to a university that could fully prepare him for a career in education, he decided to pursue his bachelor’s degree at WKU.

“I wanted to go somewhere that produces the best teachers,” Cabrera said.

Cabrera said his favorite thing about WKU is the Hilltopper Spirit and the sense of community that comes with it.

“The Hilltopper Spirit is about being willing to achieve your goals and go after what you want in life,” Cabrera said. “No matter what background you may come from, you will never feel excluded from anything while on the Hill.”

As a student in the Mahurin Honors College at WKU, a residential advisor for Zacharias Hall, a student in the SKyTeach program, and a member of the National Society for Leadership and Success, Cabrera stays busy. When he is able to steal a free moment, you may find him enjoying his favorite place on campus, Guthrie Fountain at Van Meter Overlook.

Cabrera said the opportunity to participate in applied learning through the SKyTeach Program at WKU is another favorite from his time on the Hill. He said the program has already made a substantial impact on his college career.

“The SKyTeach p­rogram is wonderful. I don’t just read theory out of a textbook; I actually get the experience of going into a classroom to observe and teach,” Cabrera said.

Through his academic programs, Cabrera is pursuing a career as a middle school math teacher. Even though he is a sophomore and has a couple years left at WKU, the SKyTeach program is already giving him hands-on experiences in the classroom. That means he doesn’t have to wait until he is officially a student-teacher during his last semester of college to know if teaching is the right choice for him.

Cabrera said he is pursuing a career in teaching because he wants to have a positive impact on the lives of students.

“I know this is a weird time in their lives, and I want to be that big brother figure, or even a father figure if that’s what I have to be,” Cabrera said. “I want to be someone they can look up to and someone who will inspire them to do better for themselves.”

Cabrera’s family has been the biggest inspiration in his pursuit of creating positive change in the world. He said that because the Dominican Republic has one of the most underperforming education systems in the world, he hopes to one day open up his own school to help students gain a high-quality education.

The Kentucky Council on Postsecondary Education recently convened experts from colleges and universities across the state who will work to ensure public higher education curricula includes essential skills.