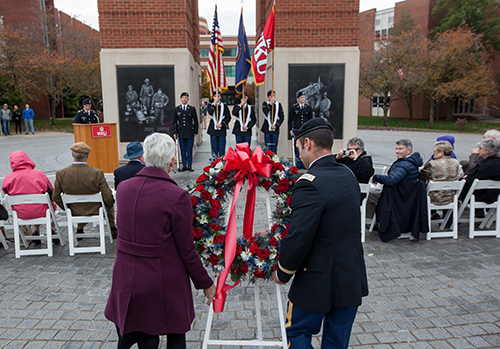 WKU will observe Veterans Day at 11 a.m. Nov. 11 with a wreath-laying ceremony at the Guthrie Bell Tower followed by the ROTC Hall of Fame Induction Ceremony.

The Veterans Day ceremony will include remarks from WKU President Timothy C. Caboni.

The events will follow WKU's Healthy on the Hill guidelines.

William R. Houston was born and raised in Central City, Kentucky. He joined the ROTC Program at WKU, participated as a member in the Pershing Rifles, and graduated in 1964 as a Distinguished Military Graduate. Bill branched Military Intelligence with a branch detail in Armor.  His first assignment was in D Troop, 1st Recon Squadron, 2d Armored Calvary Regiment near the East/West German border. Following the birth of his daughter and a promotion to Captain, Bill was sent to Vietnam for service in the 4th Battalion, 23d Mechanized Infantry, 25th Infantry Division; one day after the beginning of the 1968 Tet Offensive.

Bill performed intelligence roles gathering real time information and conducting aerial reconnaissance for the battalion command group. The Battalion Commander and S-3 were often performing combat operations, so Bill often assumed command of the Fire Base in their absence. In August of 1968, he began to receive intelligence reports that indicated a likely attack during was going to happen during the night. On 22 August 1968, with the troop strength being thin, Bill and his men responded to an attack around 2300 hours, fighting courageously until dawn receiving relatively few casualties compared to 25 enemy KIA.

It was for his gallantry in this action that CPT Bill Houston was awarded the Silver Star. His citation reads in part that “A numerically superior enemy force launched an intense rocket, mortar, and ground attack against a friendly fire support base. With complete disregard for his own safety, CPT Houston crawled through barrage of enemy mortar fire to evacuate a seriously wounded soldier who was pinned beneath a damaged vehicle.” He continuously exposed himself to hostile fire throughout the night evacuating wounded troops while simultaneously directing artillery and airstrikes on the invading enemy forces. His fearless actions and personal bravery ensured the success of his mission in the face of overwhelming odds. Just prior to the end of his tour, he added the Bronze Star to his list of awards and decorations earned in combat.

Although initially inclined to be a career officer, Bill reached a crossroads in his life. He chose to leave the Army in December 1969 and began working at the Ford Motor Company in Dearborn, Michigan. He soon relocated to St. Petersburg, Florida, and then Orlando as he began a career in the life insurance industry. In 2003, he started the Family Mortgage Company and ultimately retired in 2010.

Bill enjoys living in Florida alongside his wife of 55 years. They enjoy being active in their church and other related charitable activities, all while spending time with their three adult children and five grandchildren. For the past 15 years, Bill has been involved in a preservation organization known as the Bear Lake Association, which provides clean water and recreational activities on a 310-acre lake with 178 adjoining private properties. He joined as a member of the board, chaired the ecology committee, became vice president, and ultimately president of the association where he continues to serve today.