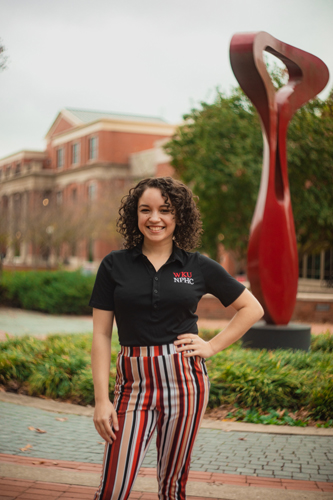 WKU senior Destiny Smith of Bowling Green wanted more leadership experience and to develop as a leader. Through her involvement in several groups, and most recently becoming the president of WKU’s National Pan Hellenic Council (NPHC), Smith will finish out her undergraduate career leading two events, the NPHC Step Show Watch Party and Black Town Hall, bringing students together at WKU.

“I have always been a natural leader. I like leading,” Smith said.

Smith holds membership in WKU’s chapter of the National Society of Leadership and Success and serves in multiple positions in the Eta Phi Chapter of Sigma Gamma Rho Sorority, Inc.

“It [serving as president of WKU’s NPHC] has been such a great experience so far. This experience has helped me grow so much,”Smith said.

Smith said, “The NPHC’s main goal is to connect with the campus community, the students especially, help students in any way we can, and do community service around the community.”

This fall semester, under Smith’s leadership, the NPHC held seven events following Healthy on the Hill guidelines and continued volunteering once a month with organizations like the Salvation Army.

Smith said, “It has been a different kind of difficult, I would say, trying to find ways that we can still do things within our community, do things on campus.”

With community service at the heart of the NPHC, many people know the fraternities and sororities for their annual step show that raises money for an academic scholarship. Therefore, when the question of whether or not to have a step show came up during the NPHC Retreat, the discussion ended with an approach that they do not believe anyone else in the country has taken – a step show watch party.

“Who would have thought we would have been having a watch party for the step show?” Smith said.

Instead of the NPHC fraternities and sororities stepping live on stage, organizations worked with videographers to record their performance in advance. On Saturday, October 31 at 2 p.m., one combined video of all the submitted performances will broadcast in DSU. A limited number of guests can watch the show in the auditorium and overflow rooms with masks required and social distancing enforced. The video will also air on Facebook at https://www.facebook.com/wkugreeks. Like a regular step show, the judges will view the performance for the first time on Saturday, score the organizations, and award a winner. Participating organizations include the fraternities Alpha Phi Alpha, Kappa Alpha Psi, Phi Beta Sigma, and Iota Phi Theta.

This NPHC will award its $700 scholarship through the Outstanding Minority Scholarship. Applications are due November 16.

The NPHC Step Show will not be Smith’s final event for the semester, though. Two days after the step show, Smith and the NPHC will host the Black Town Hall at WKU in partnership with the Association for the Study of African American Life and History (ASALH) with the support of their president senior Tracy Scott.

“Another big part of being NPHC President this semester has been trying to provide a safe space on this campus for Black students. The Black community has been facing and trying to cope with a lot the past several months,” Smith said. “I want students to feel safe at NPHC events and around our members and know that they can reach out to us for anything. That’s why I’m so excited for our event on November 2. We’re essentially providing a safe space for Black students to say whatever they need to get off of their chest.”

The Black Town Hall will begin at 5:30 p.m. on November 2 in DSU Auditorium. The event is open to all members of the WKU campus community who want to hear more about and understand the different experiences of Black students at WKU and show support. There will be limited seating with social distancing and masks required.

“Destiny has been amazing in her role as NPHC president. She serves as a great role model for her peers. She is detail-oriented, hardworking, and motivated. She has a quiet confidence about herself,” said Randall Bogard, Assistant Director for Student Activities and NPHC Advisor.

Smith always knew she wanted to go to school at WKU – even from an early age riding around the area with her family. She worked in her academic field at the WKU Child Care Centers, gained valuable leadership experiences through organizations, and even met her fiancé Damien Duncan and became engaged under the “Kissing Bridge” at WKU. Smith will graduate in December 2020 with a degree in Family and Consumer Sciences with a concentration in Child Studies. She hopes to continue her education in the WKU Graduate School.

For more information about the National Pan Hellenic Council at WKU and the NPHC scholarship, visit https://www.wku.edu/wkugreeks/nphc/.