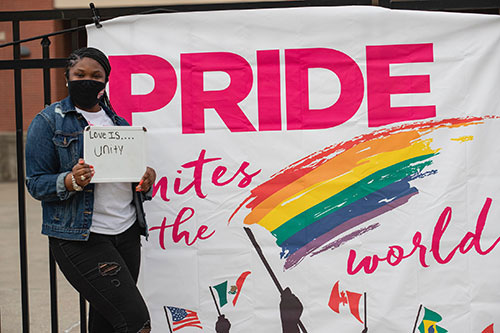 Higher Education in Student Affairs student, Robin Lester (’21), is heavily involved in the planning and implementation of events and programs for LGBTQ+ History Month. The month-long initiative, which occurs in October of each year, recognizes the historical impact and influence of the lesbian, gay, bisexual, and transgender community.

LGBTQ+ History month gained support in 1994 as efforts were organized around “National Coming Out Day”, established on Oct. 11. From there, efforts gained traction as LGBTQ History Month earned attention from organizations such as Gay, Lesbian and Straight Education Network, or GLSEN. Growth continued as “Spirit Day”- a day where allies don purple in support of the LGBTQ+ community - was included in the days of notoriety. The month also incorporated solidarity movements such as “Ally Week”, which typically takes place around the beginning of October. LGBTQ+ History Month includes the anniversary of the murder of Mathew Shepard on Oct. 12 which spurred the development of the Mathew Shepard and James Byrd, Jr. Hate Crimes Prevention Act.

“My role [for LGBTQ+ History Month at WKU] was to coordinate events and programs for students, faculty, and staff. I started by building my committee with the help of Lamario Moore, the Intercultural Student Engagement Center Program Coordinator,” Lester said when asked about her involvement with LGBTQ+ History month activations at WKU. “We sat down and talked about my ideas and he directed me to contact several staff, faculty and alumni and invite them to be part of my committee.” Organized activities for LGBTQ+ History Month included LGBT Trivia, a Sexual Health and Wellness discussion, and a diversity training panel, among various other activations.

Lester is proud of the groundwork WKU has laid for the LGBTQ+ community but mentions there is always room for improvement. “This campus is more inclusive, but there are some gray areas that still need to be addressed.” Lester said. She mentions that in order to help minority students feel more included, it’s important to have a continuation of programming throughout the year, rather than just a dedicated month.

“I want all students on campus to feel included [-] I know what it feels like to be a minority student on campus trying to navigate college.” Lester said. “No matter your race, sexuality, and gender your campus should feel like home no matter what. I have seen the efforts Western has made.”

After graduation, Lester hopes to work at a University where she can purposefully weave together her work in higher education and her affinity for community involvement. Lester mentions she has interest in several different areas including multicultural affairs, advising, and student activities. In her free time, Lester enjoys spending time with her family, friends, boyfriend, and dog, Blu. The WKU LGBTQ+ community is proudly growing. Students can join Queer Student Union, or QSU, which strives to provide a safe environment for LGBTQ+ people on WKU’s campus and seeks to cultivate a sense of community, a support network, and strong representation for LGBTQ+ interests at WKU. Additionally, Queer Student Union*Transgender Non-Binary Student Group (QSU*TNB) QSU*TNB is a sub-group of QSU developed specifically for transgender, non-binary, gender non-conforming, and questioning students. Students with interest in joining either group may contact QSU*TNB via email at qsu.tnb@gmail.com for more information. There is also a standing meeting every Wednesday at 5pm for those who would like the join. The zoom link is available via Instagram at @qsuwku.