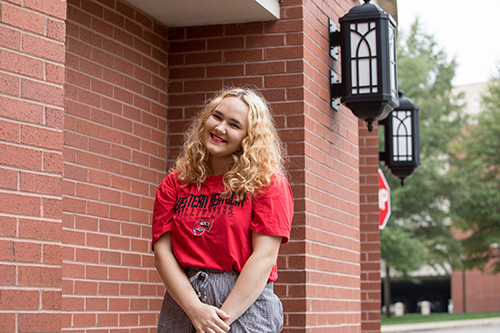 Bridget Beavin has always been interested in a career in public service. Raised in Louisville, KY, she is now a sophomore on the Hill pursuing degrees in History and Political Science. Ultimately, she plans to work in the government or the non-profit sector. Beavin believes WKU is setting her up well for this career path.

“My Political Science and History classes have given me great context of social issues to be addressed and the political institutions through which to fix them. Also, the Joint Undergraduate-Master's Program (JUMP) allows me to take graduate classes as an undergraduate student, providing me a fast-track towards earning my Masters in Public Administration. WKU offers many undergraduate research opportunities, such as the FUSE grant and internship opportunities with local campaigns and non-profits,” Beavin said.

Beavin is also a member of the Potter College of Arts and Letters (PCAL) Dean’s Council of Students, the college’s official ambassadorial group. She finds the PCAL community to be incredibly supportive and creative. “Whether it’s social science majors coming up with innovative ways to solve society’s problems or fine arts majors who create beautiful works of arts, everyone in Potter looks at the world in a different and unique way,” Beavin said.

In this election season, she has valued the opportunity to learn about the election and voting system through her History, Political Science, and English classes. She stated, “As a Political Science major, elections are extremely important to me, and they should be important to everyone. I think people often take the right to vote for granted but learning about different governments around the world in my classes has taught me to appreciate our right to vote in the US.”

Beavin also shared that she had the opportunity to learn about the candidates in her English 300 class this semester. Each student created a political engagement presentation that shared each political party’s stances on issues such as education, health care, and climate change. “These presentations informed the class about each candidate’s stances, so everyone can be prepared to vote in the upcoming election,” Beavin noted.

Beavin’s favorite class she has taken at WKU is HON 251: Citizenship & Self, taught by Associate Professor of History, Dr. Alexander Olsen. Not only did she learn about the value of active citizenship at WKU and in greater society, but she also found the class to be a fun experience. Looking back, Beavin noted that, “I met so many of my best friends in that class, and we got to wear costumes and have tea parties!”

Ultimately, Beavin feels that her experience in PCAL has prepared her to be an active citizen and pursue a career in community engagement.