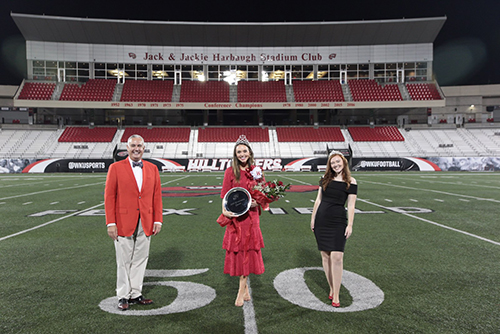 Harne, daughter of Toddy and Kristal Harne, is a Communication Sciences and Disorders major and was sponsored by Alpha Delta Pi, Alpha Gamma Rho and Delta Tau Delta. She was one of 28 candidates for Homecoming queen.

First runner-up was Megan Rowe of Winchester, daughter of Roger and Heather Rowe. She is a Biology and Chemistry major and was sponsored by Chi Omega and Pi Kappa Alpha.

Second runner-up was Maddie White of Willisburg, daughter of David and Donna White. She is a Communication Sciences and Disorders major and was sponsored by Alpha Omicron Pi and Kappa Alpha Order.

A video of the ceremony will be shown at halftime of Saturday night’s Homecoming football game. The Hilltoppers face Marshall at 6:30 p.m. at Houchens Industries-L.T. Smith Stadium. For more about WKU’s Homecoming 2020, visit http://alumni.wku.edu/homecoming.