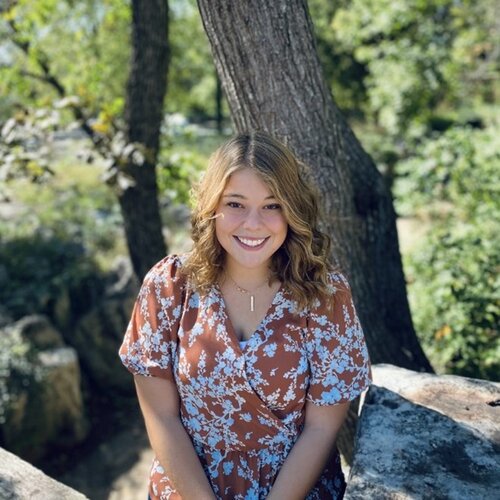 “In the English Department, you can create your own pathway to the destination you want and to a job you’re interested in.”

Hanna Van Winkle is a senior at WKU from Slaughters, KY. She is double majoring in English with a concentration in Professional Writing and Communication Studies. She is also enrolled in WKU’s Joint Undergraduate-Master’s Program (JUMP) in Student Affairs. Van Winkle is the lead Topper Orientation Program (TOP) Guide, an Admissions Ambassador of the WKU Office of Admissions, and a member of the Potter College of Arts and Letters Dean’s Council of Students (DCS).

Van Winkle applied to WKU after touring the campus and learning about its community. Having been raised in a family of educators, Van Winkle began her academic career as an English for Secondary Teaches major (EST). After her freshman year, Van Winkle realized she wanted to get more involved on campus. In March 2018, Van Winkle became a member of Midnight on the Hill, a fundraising team on campus for St. Jude Children's Research Hospital, and she is now the co-executive director of the team. This experience solidified Van Winkle’s love of serving the community.

Soon after, Van Winkle became involved with TOP to introduce prospective and new students to WKU. In addition to becoming a TOP Guide, Van Winkle developed an internship working with TOP in the Office of Admissions. She began both positions as a sophomore in December 2018. As a TOP guide, Van Winkle gives tours to prospective students and their families, answers their questions, and assists in orientation events. In her internship, Van Winkle used her English skills to edit documents, write emails and social media posts, and contribute to the TOP booklet given to students after orientation. Van Winkle also presented to other TOP Guides and developed TOP training materials using her knowledge from her EST classes.

Van Winkle enjoys sharing her enthusiasm for WKU. She named the most rewarding aspect of her work as the moment “you can see in the student’s face that they’re excited to come here, and you know that you’ve helped somebody find their home for the next four years.” For her passionate hard work, Van Winkle advanced in her positions to lead TOP Guide and Admissions Ambassador.

From a fellow TOP Guide, Van Winkle learned about the DCS, and she was intrigued by the opportunity to share her voice by working closely with Dean Snyder. She joined the council in April 2019. As a member of the DCS, Van Winkle assists with recruitment events, discussing ideas with Dean Snyder, and serving as a peer mentor for PCAL students. This year, Van Winkle is taking on a new role in the council as the leader of the Fundraising and Philanthropy Committee, an area of great interest to Van Winkle.

Van Winkle has faced many new challenges in her positions since the pandemic began in March. This first challenge was to change the plans for the Southern Regional Orientation Workshop (SROW), an important event for orientation leaders across the nation. WKU was to host the 2020 SROW over the weekend of spring break. Van Winkle and her coworkers had to shift everything online. The theme of keeping to online gatherings has continued into the fall semester.

Van Winkle named the skill of creating digital text and media necessary for this shift. She credited Dr. Dan Liddle’s Technology & Writing course for helping her with this skill, saying, “[The course] helped me understand different graphic tools as well as how to convey information to a particular audience through technology. I don't think I would have been as successful if I didn't understand the information learned in that class.”

Working within the limitations of the pandemic, Van Winkle and her teams were able to adjust certain events to continue in-person. She is still guiding campus tours, and she is currently preparing for a socially distanced PCAL Fall Festival. These challenges provided Van Winkle with critical experiences of working within higher education.

Through these experiences, Van Winkle discovered she wanted to continue working in higher education after graduating. She switched from an EST concentration to Professional Writing because she uses PW skills in her positions every day creating correct and effective content. She also switched her minor in Communication Studies to a major to further enhance her communication skills. After she graduates in May 2021, Van Winkle will apply for positions at WKU similar to her current roles while she finishes her Master’s in Student Affairs.

Van Winkle credits her confidence in her path to her English studies. She believes she can apply the communication skills taught in English courses in any field. This creative independence is what Van Winkle loves most about being an English major. She explained, “We learn how to take and a blank piece of paper and make something creative to captivate an audience.” To the students who wish to get the most out of their WKU experience, Van Winkle advises, “Get involved. Pick one thing you’re interested in, and put your name on the list.”