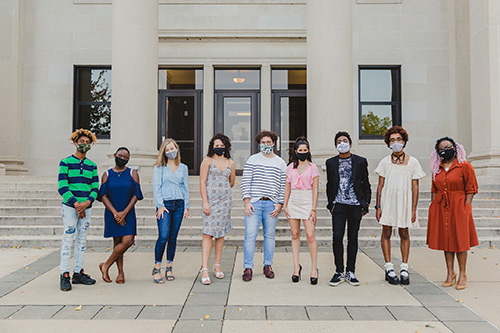 The WKU Forensics Team kicked off its competitive season by hosting the 2020 Fall Forensic Tournament virtually the weekend of Sept. 25-27.

Combining three tournaments into a single weekend, the event offered competition in debate and individual events over three days, hosting 43 schools from 17 states including Notre Dame, Penn State University, The University of Nebraska-Lincoln, and the University of Alabama. WKU students competed in the tournament, but as host the team was not eligible for team sweepstakes awards.

WKU Director of Forensics Ganer Newman expressed his pride in the coaching staff and the students on coordinating such a large competition on a virtual platform. “This was one of the largest competitions we’ve hosted in the last few years,” he said. “There were an astounding 90 entries in Lincoln Douglas debate, which is the largest entry we’ve had in that event in the past decade. Coordinating all of that over video conferencing technology took a tremendous amount of planning and precise execution.”

Newman also remarked on the involvement of alumni in the tournament. “Our alumni are scattered all over the country, and even the world, so travelling to campus to participate is usually cost prohibitive. Hosting the tournament virtually allowed dozens of alumni to volunteer as judges and reconnect with the team.”

Along with hosting, WKU team members also competed. On Friday, the team competed in the Alexis Elliott Memorial Round Robin Debate Tournament, where each school entered their top competitors. WKU junior Madelynn Einhorn placed second at the tournament. The students traded duties hosting and competing in the subsequent Saturday and Sunday events. Two team members were recognized as top three overall speakers at the tournament, with Tess Welch placing second and Miles Morton placing third overall.

“Over the course of the weekend,” Newman said, “our students won seven event championships. It was a great way to start the season!”

Next week, the Hilltoppers will compete virtually in competitions hosted by the University of Alabama and Lafayette College.

Results from the WKU/Alumni Fall Forensic Tournament are as follows:

View from the Hill: WKU preparing for Commencement ceremonies

Lots of planning and safety precautions have gone into preparing for not one but two Commencement weekends at WKU next month. WKU’s Amy Bingham explains how they will be held safely in this week’s View from the Hill.